The Looming Financial Crisis and the Need for Monetary Policy Coordination

The future of the global economy looks bleak, plagued by a dysfunctional international order and lack of policy coordination. The result, says Ke Long, could be a deeply polarized world unable to mitigate geopolitical risks or avert stagflation.

The global economy is beset by unprecedented challenges in the face of a dysfunctional postwar international order. Many multilateral institutions, notably the United Nations, no longer seem capable of performing the basic task of maintaining a stable world order. The Group of Seven industrial democracies find themselves increasingly at odds with the BRICS countries of Brazil, Russia, India, China, and South Africa, which have become the main drivers of global growth. At the same time, geopolitical risks continue to mount, with Russia’s invasion of Ukraine and growing tensions in East Asia triggering a new arms race. The international community appears incapable of containing these multiple threats.

Adding to these woes is the growing inability of mainstream economics to offer effective solutions to today’s conundrums. For much of the postwar era, governments turned to an expansionary fiscal policy as a means of stimulating demand to stabilize and maintain global economic growth. After the policy of adjusting effective demand achieved a fair degree of success, authorities turned to policies designed to boost supply. The common objective in both cases was to achieve growth by balancing supply and demand.

The 2007–8 global financial crisis ushered in a new phase in economic policy, as central banks in the world’s leading economies reduced interest rates to near or even below zero and resorted to unconventional tools like quantitative easing to increase the money supply and provide greater liquidity. Such unprecedented policies engendered asset bubbles on a global scale and exacerbated inequality. Most central bank governors are aware that the economic growth generated through massive monetary easing does not accurately reflect economic reality. And since monetary tightening is likely to have a much bigger impact on the economy than relaxation, the question on everyone’s minds is how to achieve a soft landing.

One big headache is the specter of inflation. To prevent real household income from declining due to rising prices, Prime Minister Fumio Kishida and Bank of Japan Governor Haruhiko Kuroda are urging companies to boost wages. Such expectations are unrealistic, though, given the fact that the economy is hardly growing.

Another serious challenge confronting Japan is the precipitous depreciation of the yen. A weaker currency may help export-oriented manufacturers, but most other companies will be hurt by higher costs for oil, natural gas, components, and other essential imports. Households are also starting to feel the brunt of rising prices. The Ukraine crisis, pandemic, and China’s zero-Covid policy are impacting on corporate performance, fueling fears of increased unemployment. As disposable income shrinks, some households will struggle to make ends meet.

Also troubling is the rush with which the US Federal Reserve Board and the European Central Bank are raising interest rates in an effort to tame inflation. This, of course, risks further hampering economic growth—already sluggish without the shock of monetary tightening. The BOJ has so far been reluctant to hike interest rates, but this will exert further downward pressure on the yen. Until recently, the BOJ had been preoccupied with reaching its inflation target of around 2%. Now, inflation is emerging as a bigger threat than deflation, particularly if it is accompanied by recession and results in stagflation. 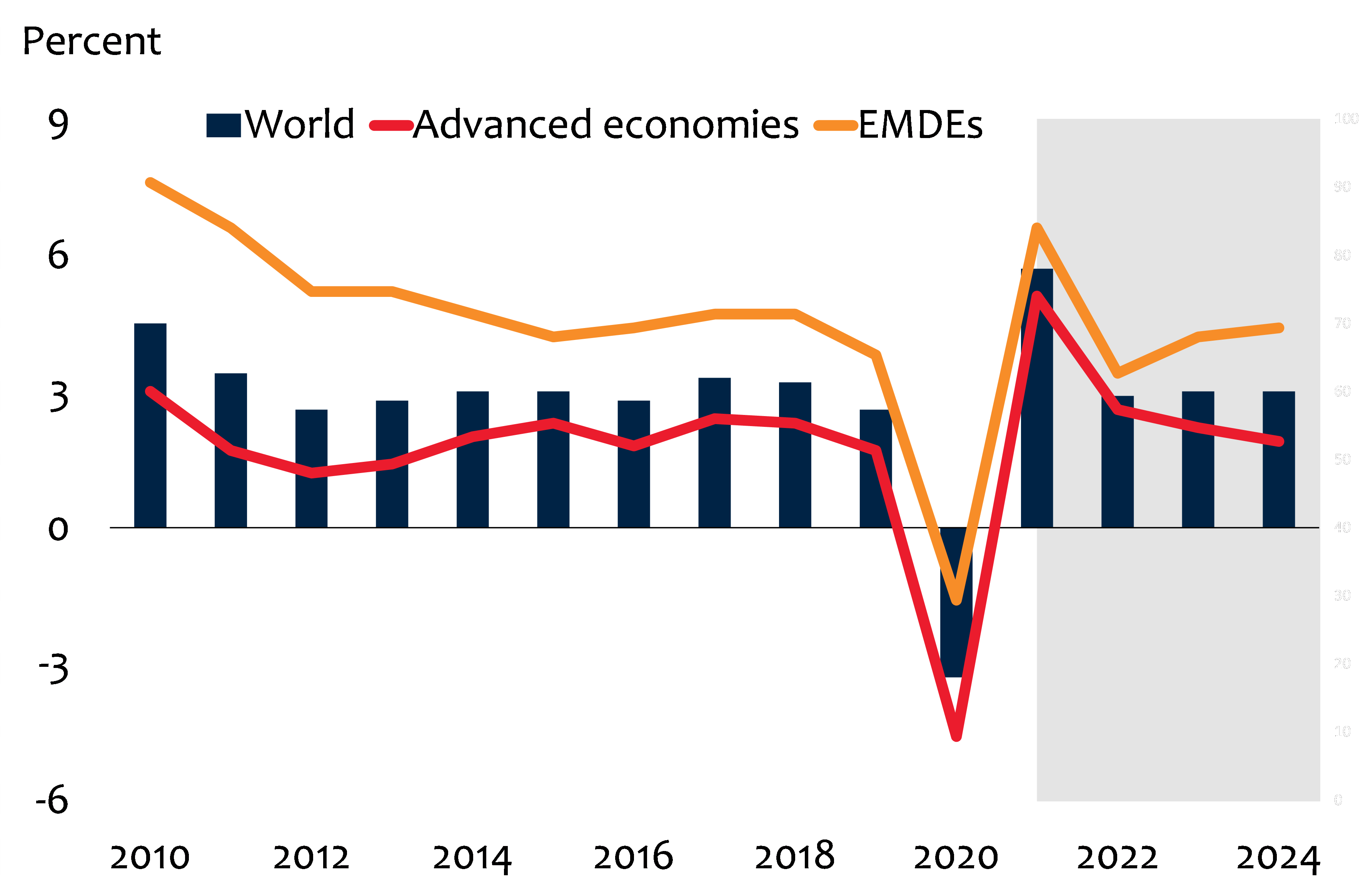 In the past, global financial stability was maintained through a system of international coordination. But that system has largely broken down in the face of the COVID pandemic and the war in Ukraine. The World Bank projects global economic growth of 2.9% in 2022, considerably lower than the 5.7% in 2021 (see Figure 1), with President David Malpass warning that stagflation could soon lead to a debt crisis in emerging economies. The lack of international monetary policy coordination could make stagflation even harder to avoid.

The state of the global economy and international finance today seems far more precarious than in 1997, for the amount of investments and loans being channeled into developing and emerging economies is on a far bigger scale. Inflation fears are rising on a global level, compounded by a war and pandemic that have dragged on longer than expected. This is not only triggering higher energy prices but depleting food supplies. The world may soon confront a food crisis.

Perhaps the biggest worry is trends in China. The stubborn adherence to a zero-Covid policy in the world’s second-biggest economy is dampening growth not only at home but also around the world. The country has now become the top creditor for developing and emerging economies, according to the World Bank, and there will be huge repercussions should China withdraw financing from these economies so that it can be redirected to struggling domestic firms. In June 2021, the World Bank projected that China’s economy would grow by 8.5%, but figures released by Beijing indicate that actual growth in 2021 was 8.1%. The government forecasts is for 5.5% growth in 2022, but the World Bank places the figure at just 4.3%. Although some economists see the Chinese economy rebounding in the third and fourth quarters, this will not be enough to make up for the lackluster performance in the first six months of 2022.

Among the G7 countries, meanwhile, there is basically no policy coordination taking place at the moment. The United States and the EU have tightened their monetary policies to curb inflation, but Japan, anxious about sliding into recession, has held firm to its easy money policy. Such lack of coordination is likely to result in greater global financial instability, as liquidity increasingly flows into the United States, where the FRB is ramping up interest rates. Normally, a policy of fiscal tightening would be expected to correct excess liquidity, but the reverse appears to be occurring in US financial markets.

Finally, how will growing geopolitical risks affect the global economy? Prospects of Russia transitioning to a more democratic system when the war in Ukraine finally comes to an end are negligible. Instead, we are likely to see the emergence of a “new Cold War” among two, polarized camps. In East Asia, fears of a Chinese invasion of Taiwan linger, even if the chances of a cross-strait contingency in the immediate future is low. The pandemic has highlighted the risks of an overreliance on China, and multinationals have started to reorganize their supply chains.

The future of the global economy will likely be shaped in large part by the emergence of a new Cold War and a realignment of the global supply chain. The democratic societies seeking to uphold the rule of law will need to rebuild a market economy with greater safeguards against infringements of intellectual property rights, in effect building a new international order with countries and regions sharing their values.