Creating a Social Safety Net for the Digital Age

Japan urgently needs to update its social safety net to cope with new global risks and meet the needs of the digital age. In his presentation at the July 22 symposium hosted by the Tokyo Foundation for Policy Research, Shigeki Morinobu calls for the My Number system to be expanded to not only keep track of tax information but also offer more effective and efficient social security services.

We face many risks today that were unimaginable just a decade ago. A pandemic has devastated the global economy, the war in Ukraine has pushed up food and energy prices, and climate change is fueling extreme environmental events.

In Japan, concern about the sustainability of the social security system—notably, the schemes for public pensions, health insurance, and long-term care insurance—is prompting young people, in particular, to divert their disposable income to savings, rather than consumption. Further exacerbating the sense of gloom is the digitalization of the economy, which is prompting fears that human workers may be displaced by artificial intelligence and robots.

These perceived risks are now expanding beyond the ability of many individuals to cope with them on their own. This is at the heart of the Prime Minister Fumio Kishida’s proposal for a “new capitalism,” which aims to achieve both economic growth and a more equitable distribution of the accruing benefits. Its goal is to enhance corporate productivity and lift Japan out of years of economic stagnation by developing human capital and enhancing job mobility.

From my perspective, this situation demands that we make full use of digital technologies to build a new social safety net integrating the tax and social security systems. While such a digital safety net would principally serve to allay people’s anxieties about the future, it can also facilitate job training and skills development, enabling them to accumulate human capital and advance their careers. By reducing future concerns about pensions and long-term care, it could also lead to higher consumption and economic growth. 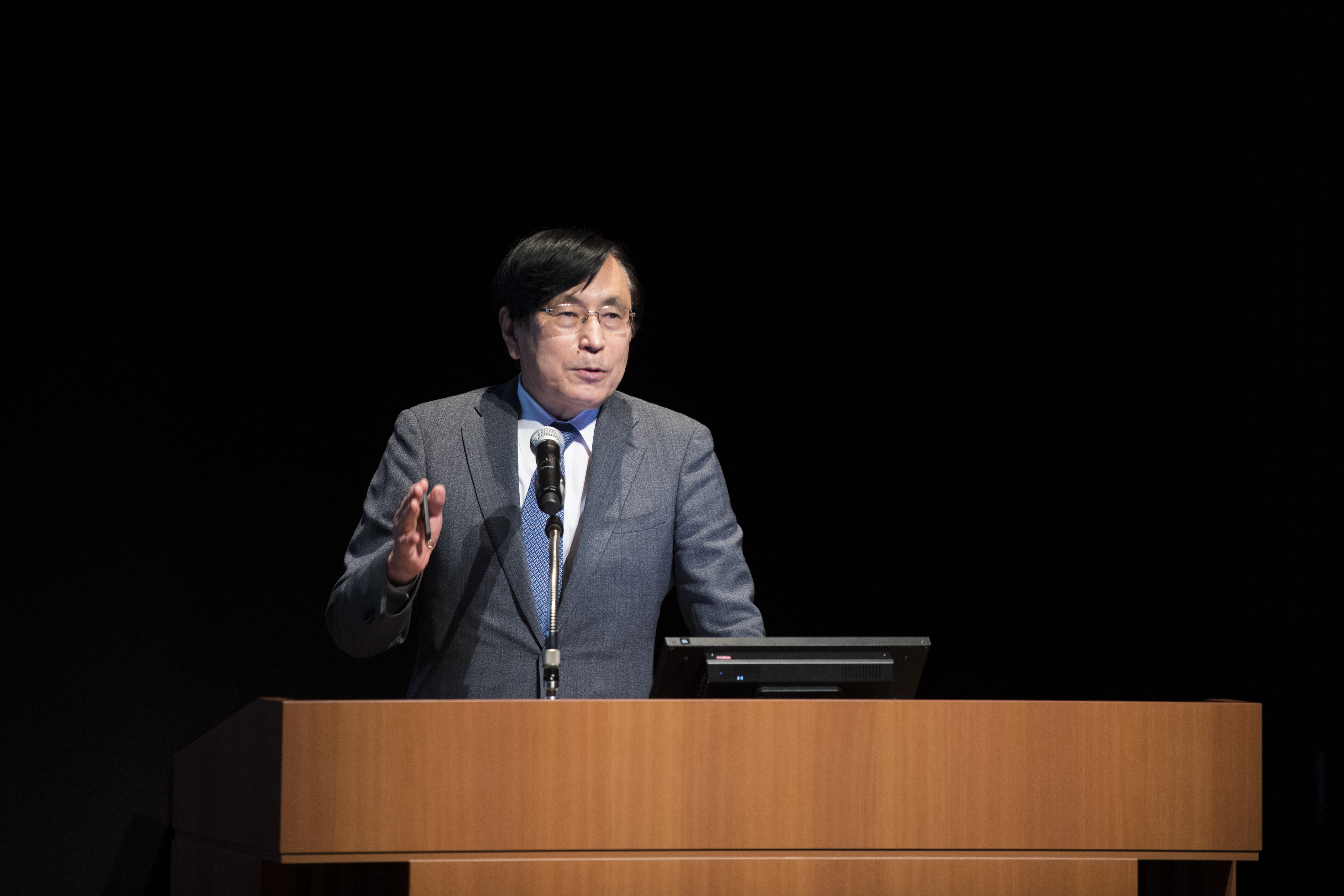 Efforts to stabilize employment and develop human capital while providing a safety net are generally called active labor market policies. They have been particularly prominent in Europe and include Denmark’s “flexicurity” model of labor market flexibility and worker security, Sweden’s active labor market programs focused on combatting unemployment, Britain’s Third Way embraced by Tony Blair in the 1990s, and the Agenda 2010 structural reforms of German Chancellor Gerhard Schröder. Here, I will focus my discussion on the Universal Credit system—introduced in Britain by Prime Minister David Cameron—since it is essentially a digital service and offers many insights for building a similar system in Japan.

Universal Credit, launched in April 2013 as part of the country’s welfare system reforms, is a type of refundable tax credit that consolidates the many social security benefits provided at the national and local levels, incentivizes work by increasing benefits based on employment income, and enables prompt benefits through online applications. It is rooted in Blair’s Third Way, “workfare” reforms, and “trampoline policy” of unemployment assistance to return people to the labor force armed with new skills, rather than trapping them in a cycle of dependence, social exclusion, and poverty.

Of the more than 30 benefits that existed at the time, 6—namely, Child Tax Credit, Housing Benefit, Income Support, income-based Jobseeker’s Allowance (JSA), income-related Employment and Support Allowance (ESA), and Working Tax Credit—were consolidated into Universal Credit for administration by the Department for Work and Pensions, greatly streamlining administrative costs. Beneficiaries can apply through an account with the Department for Work and Pensions and receive benefits online. The benefits are paid once a month to households with the aim of promoting self-reliance by helping with living costs.

What is unique about this system is that employers report worker salaries, wages, and withholding taxes to the tax authorities (Her Majesty’s Revenue and Customs) each month on a real-time basis. This information is shared with the Department for Work and Pensions, which automatically calculates changes in income and benefits on a monthly basis. For sole proprietors, quarterly reporting of financial accounting information will be mandatory from 2024, and they will need to report their income each month using their online accounts at the Department for Work and Pensions.

At the same time, recipients must meet strict conditions and are subject to penalties. To continue receiving benefits, for example, they must actively look for work, undertake preparations for employment, and present job-hunting plans and results during interviews. 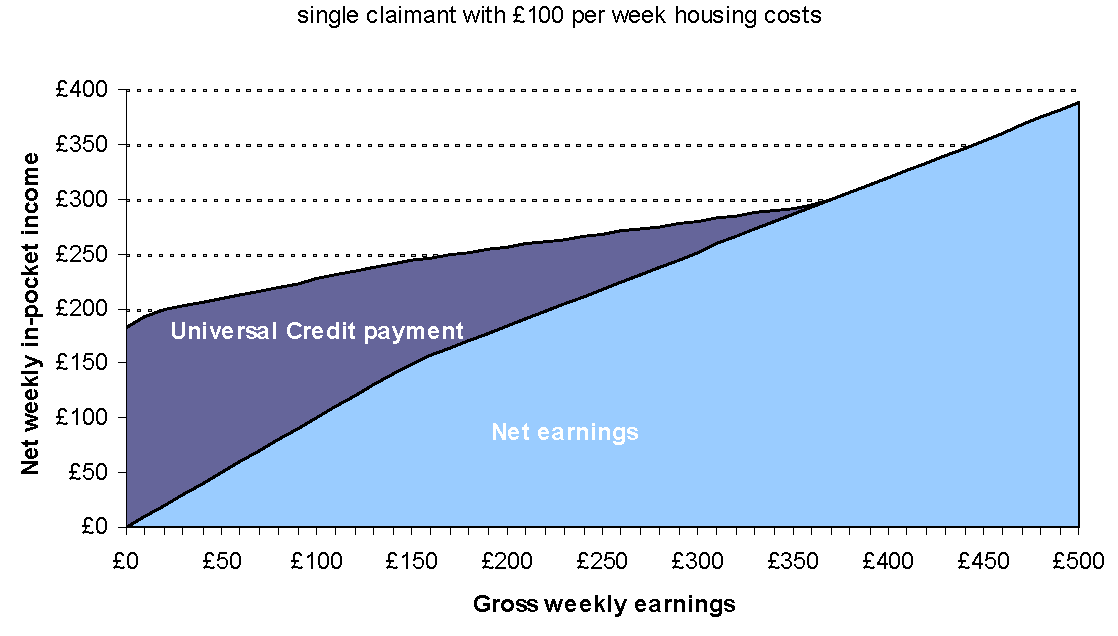 Refundable tax credits in the form of benefits and tax reductions to support lower-income households while encouraging employment have been introduced in many Western countries. Governments providing such credits through digital platforms were able to utilize such infrastructure to promptly deliver relief payments during the COVID pandemic.

Using the My Number System to Create a Digital Safety Net

The best way of building a digitally administered social safety net in Japan would be to utilize the My Number taxpayer identification system that was launched in 2012. It will need to be updated in several ways, however, for it to function like Britain’s online system.

For starters, information regarding a full range of income sources must be registered with the system. Currently, employers are required by law to report salaries, wages, and other payments, along with the amount of withheld taxes, to the tax authorities. The reporting requirement will need to be expanded to those assigning work to freelancers, as well as to platformers through whom gig workers earn their income.

Such information would then need to be shared with the ministries, public corporations, and local governments responsible for social security, to be used to ascertain those qualifying for benefits and to provide payment.

At the moment, information regarding income is shared among national and local tax authorities but not sufficiently with organizations responsible for social security. This was one reason why the government was forced to provide ¥100,000 COVID relief payments to all residents of Japan (and an additional ¥100,000 to households exempt from the resident tax), rather than directing benefits to individuals actually suffering from a drop in income. The lack of data sharing has also been blamed for the many fraudulent claims made for benefits offered to businesses. Broader sharing of My Number data is critical to building a more efficient, effective, and scam-free system.

While there is ongoing discussion regarding the general features of such a system—including at the Digital Agency’s working group on the My Number system and the digitalization of administrative services, of which the author is an expert member—there is little talk of the nuts and bolts. One reason Japan is behind so many other countries may be because of the delay in introducing a taxpayer identification number system—50 years later than in the United States and 60 years after Britain and the Scandinavian countries—during which people have become far more concerned about privacy issues.

In the interim, therefore, I propose that we take advantage of the existing Mynaportal online service that the Japanese government provides to simplify administrative procedures.

The My Number system is made up of three components: first is a number (My Number) assigned to each resident in Japan, second is the My Number Card containing an IC chip that can be used for identification purposes, and third is the online Mynaportal through which individuals can view their income information. By granting social security authorities access to the information registered on Mynaportal—provided by employers for business workers, by clients for freelancers, and by platformers for gig workers—it is possible to create an efficient and effective safety net. The National Tax Agency and the Digital Agency are already looking into such a possibility by having private companies save withholding tax and other data to the cloud, utilizing private-sector services to transfer such data to each taxpayer’s Mynaportal, and linking this to the e-Tax online filing and payment system. 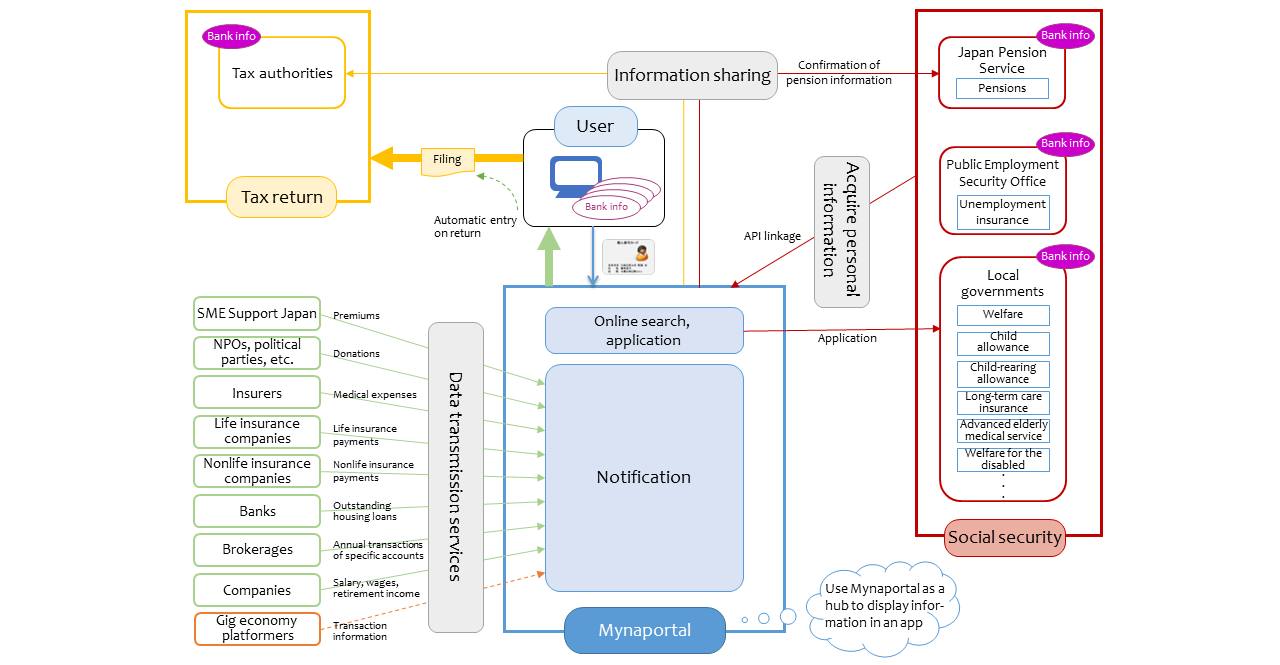 Source: Created and submitted by the author to the first meeting of the Digital Agency’s working group on the My Number system and the digitalization of administrative services, June 23, 2020.

Such a system would allow for “push-type” administrative services, where the national and local governments can identify those eligible and provide benefits automatically, without having individuals apply. Expanding the use of the My Number system for social security purposes may raise privacy concerns, so legal provisions would be needed to safeguard the confidentiality of tax information.

But postponing the digitization of tax and social security services and maintaining an analog system to allay such fears is unrealistic. The Personal Information Protection Commission (PPC), established in 2016 to protect the use of My Number–related and other personal information, will need to monitor the digitization process closely to ensure that privacy concerns are duly addressed. 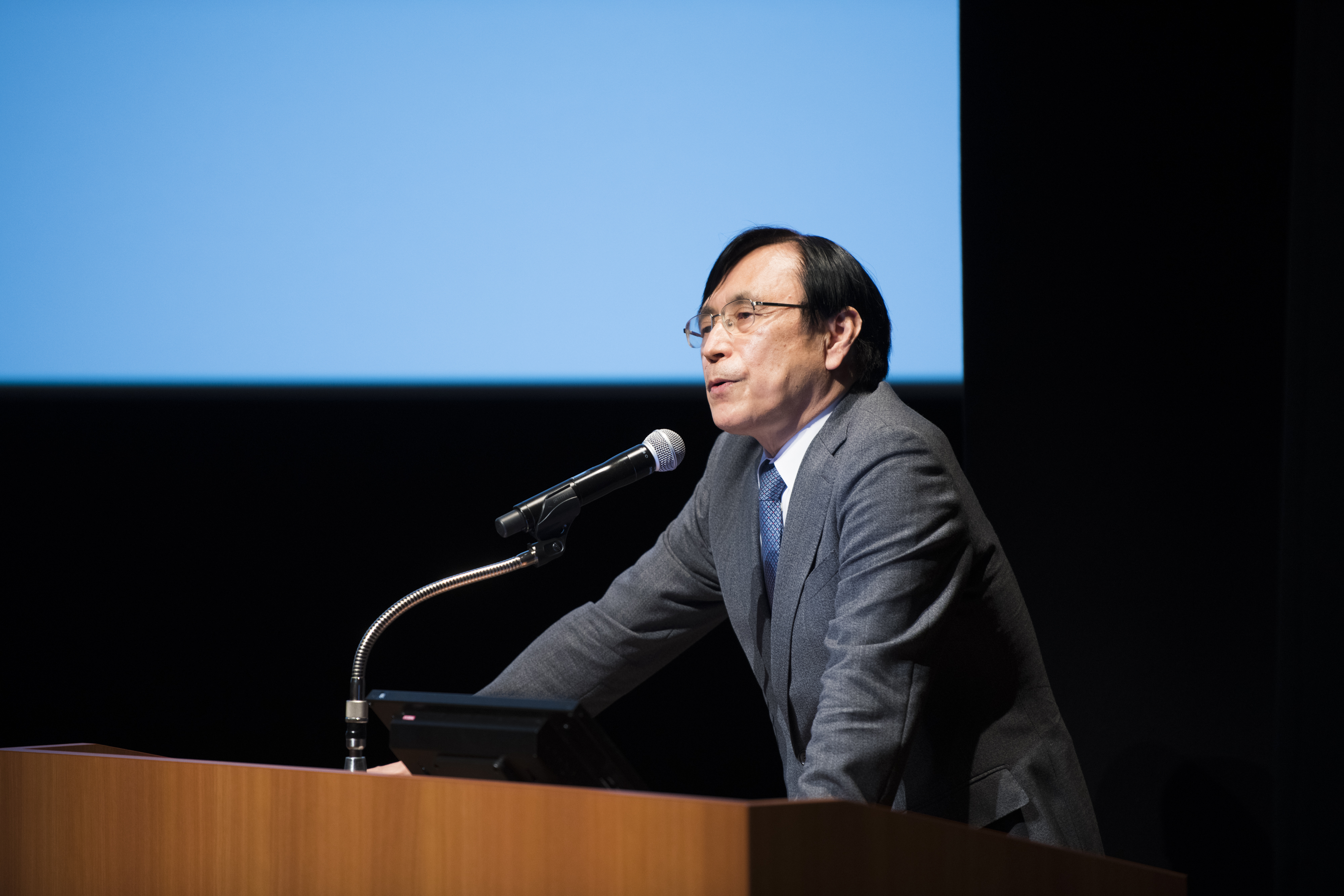 What a Safety Net Should Offer

What a social safety net in the digital age should offer is a matter to be discussed after the kind of infrastructure described above has been built. As I noted at the outset, it must help stabilize the income of freelancers, gig workers, and nonregular workers in an age when the risks considered unimaginable a decade ago are growing. It should also provide support while people seek out opportunities for skills development, job training, re-learning, and other initiatives to increase their human capital.

Specific measures might include enhancing unemployment benefits, making such benefits contingent on receiving vocational training, and offering earned income (refundable) tax credits for low-income individuals to both reduce the tax burden and incentivize work. This can later be augmented with safety-net measures that address the social security needs of all generations, such as support for early-childhood and tertiary education.

Finally, I would add that such a safety net would require the strong leadership of the prime minister and the Digital Agency, which is responsible for digitizing administrative services, as well as the close cooperation and coordination of such government organizations as the Ministry of Health, Labor, and Welfare; the soon-to-be-created agency for child and family affairs; the Ministry of Education, Science, and Technology; the Ministry of Internal Affairs and Communications; local governments; and the Cabinet Office.