Japan boasts universal water supply coverage, but its waterworks, built largely during the high-growth years, is now aging. The damage caused by recent earthquakes point to an urgent need for the seismic retrofitting of pipelines and other core facilities, but progress has been slow due to the financial difficulties of local governments and political resistance to additional outlays.

Japan’s first modern waterworks system was built in Yokohama, Kanagawa Prefecture. Trade with Western countries had begun in earnest in the latter half of the nineteenth century, but many of the ports designated to receive foreign ships saw outbreaks of cholera. An epidemiological survey in Yokohama revealed that contaminated wells were the chief cause of the disease. Countering the epidemic, municipal authorities concluded, required a safe supply of water.

In 1885, the governor of Kanagawa Prefecture enlisted the services of British engineer Henry Spencer Palmer, a former lieutenant colonel (and later major general) in the British Army who had helped establish waterworks systems in Guangzhou and Hong Kong. Under his direction, water sourced from the confluence of the Sagami and Doshi Rivers (now in Mitsui, Midori-ku, Sagamihara) began being supplied to Yokohama in October 1887.[1]

The system utilized slow sand filtration (which works primarily through biological activity on the surface of the sand bed) for purification and cast-iron pipes—which had not been used in Japan until then—to enable pressurized water delivery and prevent the entry of pollutants.

With financial assistance from the national government, other major port cities soon also introduced modern water supply systems, and the first law to regulate and supervise waterworks was enacted in 1889. The development of waterworks was promoted throughout Japan, with municipalities being assigned responsibility for their management.

Although the pace of construction slowed during the two world wars, water infrastructure was quickly installed and expanded in the postwar period. The new Constitution of Japan stated, “All people shall have the right to maintain the minimum standards of wholesome and cultured living” and “In all spheres of life, the State shall use its endeavors for the promotion and extension of . . . public health.” This prompted the enactment of the Waterworks Act in 1957, under which local governments around the country received subsidies from the national coffers to establish new waterworks systems.

The construction of new water networks continued during the high-growth years, leading to dramatic changes in people’s lifestyles. Previously, water was drawn from rivers, wells, canals, and reservoirs, and use was also made of rainwater. Buckets filled with water were carried home on shoulder poles by women and children and stored in water jars. This is still seen in developing countries today but was also typical in Japan as recently as around 60 years ago.

Homemakers went to great lengths to make the most of this scarce resource. After washing rice and vegetables, the water was used again to wipe the floor and eventually scattered in the family garden. Preserving the quality of the water source was a communal affair, with residents being required to follow strict water-use rules and pitching in when maintenance was required. Shrines were built for guardian deities, at which annual rituals were held for prayer, cleaning, and festive celebration.

Access to water supply liberated women and children from the drudgery of fetching water. The share of children attending school rose, and women were able to take on gainful employment outside the home. Large apartment complexes sprung up in urban areas equipped with baths, flush toilets, and dining/kitchen facilities, leading to the increasing nuclearization of the family.

The changes in people’s lifestyles over the past six decades have been truly striking, and the chief factors driving this transformation were rapid economic growth and the spread of waterworks.

The share of households with water supply was just 25.2% in 1950 but expanded dramatically during the high-growth years. Having now reached 98.1% (as of the end of 2020), universal water supply coverage can be said to have been effectively achieved. 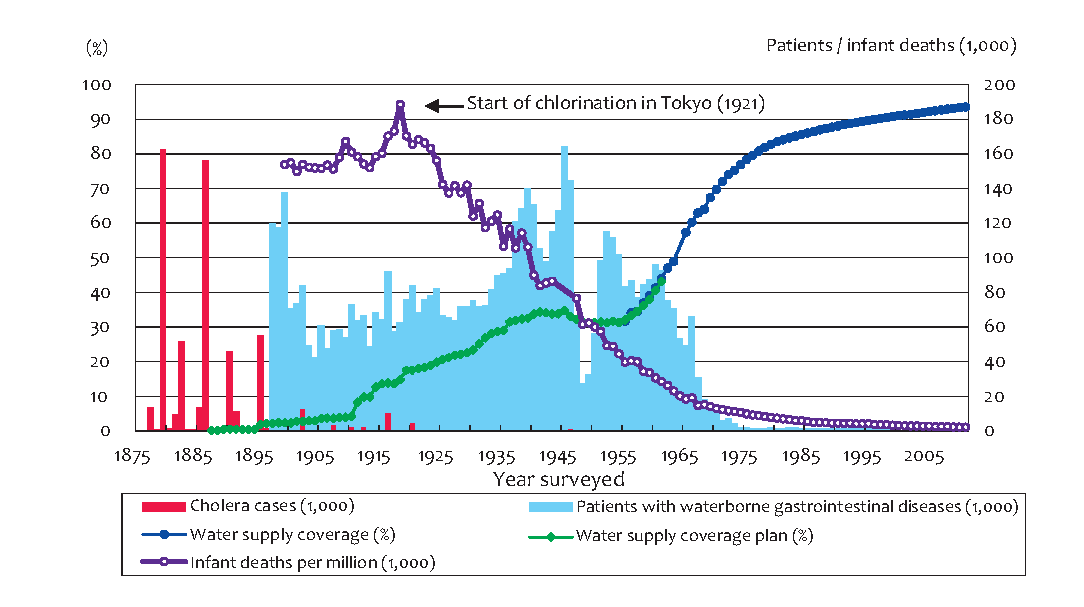 The powerful earthquake that jolted the Tokyo metropolitan area on October 7, 2021, ruptured water pipes in several locations. At a news conference the following day, Chief Cabinet Secretary Hirokazu Matsuno noted that while the magnitude-5.9 quake was the immediate cause of the fissures, the damage exposed issues with the aging and seismic vulnerability of Japan’s water infrastructure, adding that the government would provide technical and financial support to waterworks operators.

How quake-resistant are Japan’s waterworks? According to a February 3, 2021, press release issued by the Ministry of Health, Labor, and Welfare, the national average seismic retrofitting rate for main water pipes (conduits and pipes for transmission and distribution) as of the end of March 2020 was 40.9%. The prefecture with the highest share of pipes meeting quake-resistant standards was Kanagawa with 72.3%, followed by Tokyo with 64.5% and Chiba with 59.3%. At the bottom of the list were Tokushima (24.4%), Akita (24.9%), and Tottori (26.4%). Disparities were seen within the same prefecture, moreover, between urban and rural districts. Retrofitting efforts are also aimed at replacing aging pipes, but progress has been slow, especially among the smaller municipalities with limited fiscal and human resources.

Earthquake preparedness as a whole is hardly adequate when we consider that countermeasures have been taken at only 32.6% of purification plants and 58.6% of distribution reservoirs. 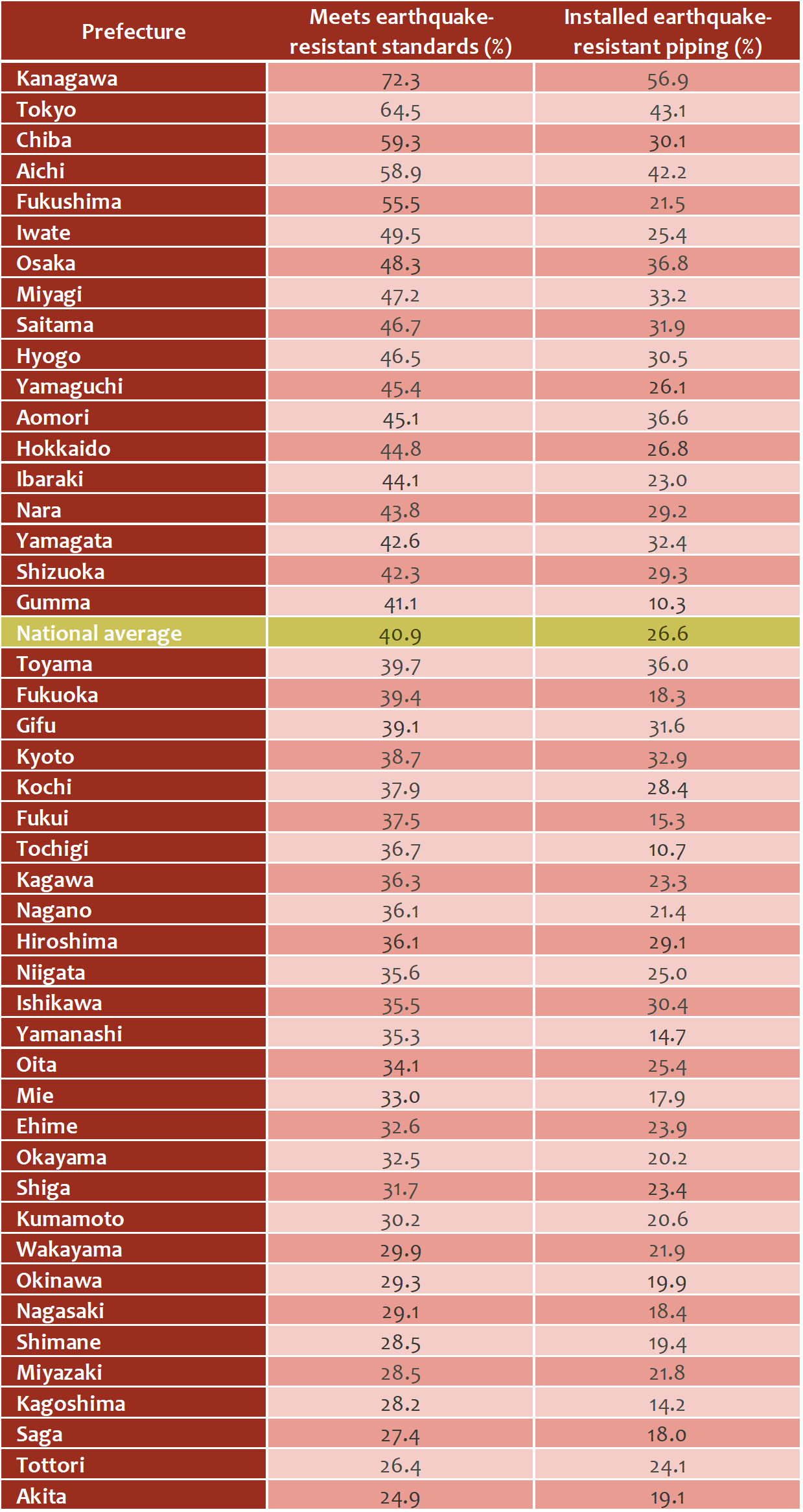 The total length of Japan’s water supply pipes is approximately 720,000 kilometers, according to the Ministry of Health, Labor, and Welfare. The share exceeding the legal useful life of 40 years was 6% at the end of fiscal 2006 but has since risen every year, reaching 17.6% at the end of fiscal 2018. Conversely, the percentage of renewed or replaced pipes fell from 0.97% to 0.68% over the same period. While some 5,000 kilometers of pipes are renewed every year, replacing all of them will require about 140 years at the current pace.

To be sure, a pipe exceeding its legal useful life does not immediately make it obsolete. In fact, many pipes that were laid 50 to 60 years ago are still in use, with efforts being made to prolong their life through a series of minor repairs.

This, unfortunately, is not enough to prevent leaks and accidents, of which more than 20,000 cases are reported annually. On June 18, 2018, for example, water gushed out of a ruptured pipe following an earthquake in northern Osaka Prefecture, disrupting the water supply for 210,000 residents. The following month, an aging pipe burst in Kita-ku, Tokyo, causing the ground to cave in. In March 2019, damage to a water main from a purification plant affected some 15,000 households in the city of Asahi in northeastern Chiba. And in December 2020, water supply to about 5,000 households in the city of Futtsu, also in Chiba, was disrupted when a transmission pipe burst; repairs were hampered by the fact that the pipe was installed more than 40 years ago at a depth of 5 to 7 meters.

Concerns about Japan’s aging water infrastructure have been voiced for years. In the wake of the devastating January 1995 Kobe earthquake, then Ministry of Health and Welfare’s committee on the earthquake resistance of waterworks called for all superannuated pipes to be replaced with earthquake-resistant ones within five years. And in 2004, the ministry drafted a Water Supply Vision.

The Vision points out that many of the facilities built in the twentieth century are aging and need to be replaced. The new century, it says, would thus be the first to experience an ongoing process of large-scale renewal and reconstruction. The task, though, is being hindered by a prolonged recession, declining birthrate, straitened public finances, and a shortage of waterworks engineers; to meet both the administrative and technical challenges, the document notes, there will be a need to consolidate waterworks operations.

Given that municipal systems are the sole source of water for nearly all residents in Japan, any interruption in supply due to a disaster or other factors would have a serious impact. The Vision thus cited a number of key policy goals:

• Raise the seismic retrofitting rate of core facilities, such as water treatment plants and distribution reservoirs, to 100%, giving priority to the Tokai and Tonankai-Nankai areas—identified as requiring enhanced preparedness due to the likelihood of a major earthquake in the near future.

The updated New Water Supply Vision, published in March 2013, moreover, notes that Japan’s waterworks will be confronting a fresh set of challenges, given the need to renew or replace aging facilities in the face of a dwindling population and, consequently, declining income. It specifically pointed to the dangers presented by increasingly decrepit pipes installed during the high-growth years. The rupturing of such pipes in urban areas will not only cause flooding but also disrupt the water supply to surrounding areas and may even result in human casualties.

Water supply to some 2.57 million households was cut off for about five months in the wake of the March 2011 Great East Japan Earthquake, and 446,000 households were without water for about three and a half months following the April 2016 Kumamoto Earthquake.[2]

The need to renew and replace aging water infrastructure is thus hardly a new issue, but it is one that continues to be neglected. Renewal is costly and may require higher water rates, so it tends to be put off for political reasons; some municipal leaders and local council members have even made election pledges to lower water bills. And a number of municipalities have lowered or waived water charges as part of their COVID-19 relief package. How are these measures being paid for? In some cases, existing surpluses in the waterworks budget have been used, while in others, allocations have been transferred from other items in the general account. The problem here is that a surplus in water supply operations is inherently meant to be spent on updating facilities.

The installation of new waterworks in the previous century resulted in great benefits for the public, freeing women and children from the hard labor of fetching water and enabling families to use as much water as they desired. The benefits of renewal, on the other hand, are harder to perceive, in spite of their importance.

Some utilities have proposed that rates be raised to cover renewal costs but have been forced to rescind such plans due to the lack of popular consent. Local governments must do more to convince area residents of the need to replace aging facilities so that the benefits they now enjoy can be passed on to future generations.