The Role and Limitations of Public Finance in Japan

As other major economies begin raising interest rates to fight inflation, interest payments for the Japanese government’s huge debt could quickly rise to unsustainable levels. Steps are urgently needed, the author argues, to restore a semblance of fiscal health in the post-COVID age.

Since the asset bubble burst in the early 1990s, the Japanese economy has been stuck in a spiral of deflation and stagnation. The government has focused its fiscal policy on stimulating demand over the past three decades, hoping to prop up the economy through increased spending, but the policy has not had the desired effect. Both the growth rate and per capita wages have failed to rise, and Japan’s finances are coming closer to reaching their limit, both in terms of outlays and debt. With the aging of the population, the burden of social security costs will weigh ever more heavily on the government, which already faces difficulties in repaying the mountain of debt incurred by successive administrations. In the following, I will consider the role of public finance in Japan and the limitations it faces.

Social security costs and debt repayments are not the only problems facing Japanese public finance. In addition to natural disasters like earthquakes and volcanic eruptions, climate change already places Japan at an increased risk of damage from flooding and typhoons. The country is also assailed by the threat of pandemics like COVID-19 and geopolitical risks, such as Russia’s invasion of Ukraine.

Guarding against these risks is just one reason why the national government needs to demonstrate greater budgetary discipline and restore fiscal health. Apart from times of crisis, government spending should be in line with revenue. When the government wants to increase spending, it should first secure adequate funding sources to support those outlays.

The Role of Public Finance

A simple but convincing way to understand the reality of the Japanese economy after decades of stagnation is to look at the flow of funds among the various sectors of the economy: government, corporate, and household. When the economy is growing, as was the case in the postwar years, businesses draw on household savings to finance investments, and the government provides social security and public spending within the limits of its revenue so as not to dampen economic activity. The household sector has a surplus and is thus a net lender, the corporate sector has a deficit and is a net borrower, and government finances are balanced, with neither a surplus nor a deficit.

Figure 1 shows the flow of funds in the Japanese economy from the 1990s to the present. One can see at a glance that conditions are quite different from that which prevailed during the high-growth years. The aging of the population has diminished the surplus of the household sector, while the corporate sector has come to enjoy a surplus from the second half of the 1990s. The government sector, meanwhile, has increased spending in the face of a deflationary, sluggish economy and has consequently been running a deficit.

Most interestingly, the figure shows clearly how the surplus in the corporate sector and the deficit in the government sector are mirror images of each other. Companies now hold the bulk of “savings” in the economy, while the government is saddled with much of the “debt.”

Figure 1. Net Lending and Net Borrowing by Sector (as % of GDP) 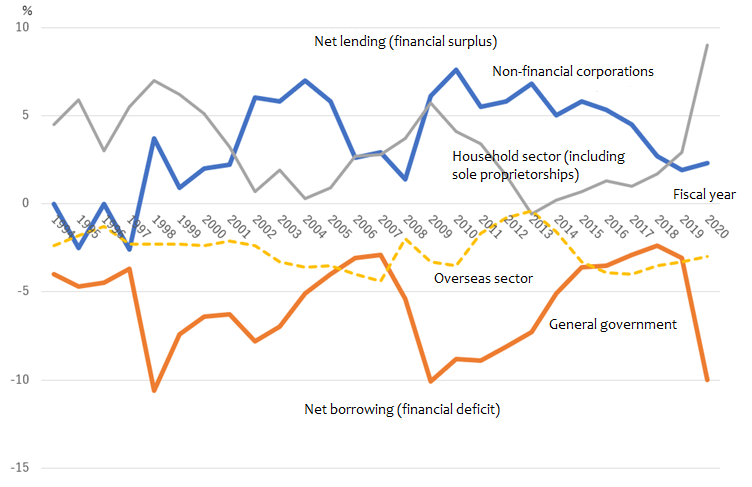 Source: Compiled by the author based on the Annual Report on National Accounts for FY2020 (Kokumin Keizai keisan nenji suikei), Cabinet Office.

The figure also shows that the overseas sector—that is, all economies other than Japan—has been registering a deficit over the past three decades. This means that the sector has been a net borrower from Japan’s perspective and that Japan has been a net creditor through both direct and portfolio investment, helping to sustain confidence in the Japanese yen.

Economic growth in Japan has been anemic throughout this period, however, in spite of the robust fiscal measures implemented to counter deflation. In 1990, average wages were the third highest in the world after the United States and Germany. By 2020, Japan had fallen behind Britain and France, and it now ranks behind South Korea (Ministry of Finance, 2022b, p.10). The lesson of the past 30 years is that government spending alone is not enough to end deflation and spur economic growth; the private sector must also contribute through proactive investment and improved productivity.

It goes without saying that Japan’s public debt has increased substantially over the same span as a result of such an expansionary fiscal policy. I will now discuss the two limitations the country faces in its public finances.

The first problem the country faces is the difficulty of curbing expenditures in the light of ballooning social security costs. I will illustrate this point by comparing the fiscal resources available to the national government against actual spending levels.

Part of national tax revenue is transferred to local governments in the form of block grants. The amount remaining after subtracting these allocations represents the fiscal resources available to the national government.

To measure fiscal health, I calculated the extent to which the government is capable of covering social security costs and general expenditures with the fiscal resources available at its disposal. Social security costs include allocations for public pensions, health insurance, long-term care insurance, employment insurance, welfare benefits, and childcare support programs. General government expenditures include the total of such spending plus allocations for public investment; education; science and technology; defense; agriculture, forestry, and fisheries; development assistance; measures to support small and medium-size enterprises; and other items, excluding allocations to local governments.

Table 1 shows the results of my calculations for the period from fiscal 2019 (before the impact of the pandemic) to fiscal 2021. Perhaps the most striking fact about these figures is the large share of government resources that went to pay for social security. In fiscal 2019, the share was 66.1% but reached 94.2% in fiscal 2020 and 81.8% in fiscal 2021, reflecting the relief payments doled out during the pandemic. If the government uses practically all its fiscal resources on social security, there will obviously be little left for anything else.

Source: Compiled by author, based on fiscal statistics.

Expenses to support the elderly and households with young children are, by law, to be financed with revenue from the consumption tax. Such revenue , though, totals only around ¥20 trillion. Actual social security expenditures in fiscal 2019 (before the pandemic) reached ¥34.1 trillion and climbed to ¥44.2 trillion and ¥47.2 trillion in fiscal 2020 and 2021, respectively, meaning that the consumption tax alone was not nearly enough to pay for social security.

The government is therefore spending well in excess of its fiscal means. This is shown clearly in (b) of Table 1 giving general expenditures (excluding debt repayment) as a share of the government’s fiscal resources. In fiscal 2019, this ratio stood at 128.3%—indicating that the government outspent its resources by 28.3%. Known as a primary deficit, this represents the shortfall (¥14.9 trillion in fiscal 2019) in tax revenue vis-à-vis government spending, as shown in (c). Owing to pandemic-related expenses, moreover, spending exceeded fiscal resources by nearly three times in fiscal 2020 and 1.7-fold in fiscal 2021, resulting in a primary deficit of ¥90.4 trillion and ¥41.4 trillion in those years.

Social security costs are steadily mounting, requiring deficit-covering financing to pay for other government services and pushing up total government debt. Fiscal measures to end deflation and offer pandemic relief in recent years have only increased the need for additional spending. This is leading to the second limitation facing Japan’s public finance: continued borrowing to cover perennial deficits is becoming increasingly difficult.

Source: Compiled by the author based on the draft fiscal 2022 budget, contained in Wagakuni no zaisei jijo (Japan’s Fiscal Situation), Budget Bureau, Ministry of Finance, 2021.

How has the government been able to continue expanding its outlays despite mounting debt? The answer can be gleaned from (c) in Table 2: interest rates fell dramatically during the 1990s and have since remained extremely low.

The low level of interest for Japanese government bonds is without parallel elsewhere in the world. It is the result of the Bank of Japan’s policy of “qualitative and quantitative monetary easing with yield curve control,” under which the bank carries out open market operations to purchase government bonds, thereby supplying funds to financial markets and keeping interest rates low. The policy of quantitative easing began in earnest when Haruhiko Kuroda became BOJ governor in April 2013, not long after Shinzo Abe returned to office as prime minister in December 2012. Since then, there has been a dramatic increase in the share of government bonds held by the BOJ.

Table 3 shows the owners of bonds issued by the national government, local governments, and social security funds. As the table makes clear, the share held by the BOJ increased substantially during Kuroda’s tenure. As of the end of 2021, the BOJ held ¥530 trillion in such bonds, or 43.4%—almost half of all outstanding government bonds and far more than the proportion held by banks and other depository institutions. It has been thanks to this policy that interest rates have been kept so low.

Note: “General government bonds” refer to those issued by the national and local governments and social security funds, including treasury discount bills and Fiscal Investment and Loan Program bonds.

The big question, of course, is how long this can be sustained. Inflation fears have already prompted monetary authorities in the United States to raise interest rates. This is having an impact on the Japanese economy, as investors offload yen in favor of the dollar with higher interest rates, causing the yen to depreciate.

The Japanese economy has remained stagnant over the past three decades. Wages have not risen, but neither have prices, and this has induced a kind of complacent stasis. The situation may soon change, however, as a cheaper yen triggers inflation, causing prices to jump before any tangible increases in wages. In these circumstances, the BOJ may no longer be able to sustain its purchase of low-interest government bonds—a policy that accelerates the yen’s depreciation. Interest rates on bonds could then climb, potentially crippling the government’s ability to service its debt.

Figure 1 showed how the flow of funds, with Japan being a net lender for the overseas sector, had sustained international confidence in the yen. Should Japan stick to its ultra-easy monetary policy while other major economies begin tightening theirs, a devalued yen could push Japan’s international balance of payments into the red and lower the country’s credit rating.

In the foregoing, I have discussed the role and limitations of public finance in Japan. The risk posed by rising interest rates on the government’s ability to service its growing debt has long been pointed out, but such fears had thus far been thought immaterial. The aim of this article is to argue that the situation has now changed.

Interest payments of just ¥7 trillion to ¥8 trillion for national debt now in excess of ¥1,000 trillion are unlikely to last much longer, and we need to begin taking steps to restore a semblance of fiscal health in the post-COVID age. Fiscal health requires that the government have the financial resources to pay for what it spends, achieving and maintaining, at the very least, a primary surplus—ensuring there is enough revenue to cover noninterest expenditure. This will be critical to enabling Japan to deal with any new crises that may occur in the future.

Ministry of Finance, 2022b, Materials on Tax System Reforms in Fiscal 2022, prepared for the January 20 meeting of the by the government’s Tax Commission.