The Cycle of Failure in Japanese Fiscal Policy (1): Spending Constraints in an Aging, Tax-Averse Society

Japan’s fiscal policy is trapped in a vicious cycle, and the latest stimulus of record-breaking size is unlikely to break the chain. In part 1 of his analysis, Hideo Hayakawa draws on international comparisons to highlight the imbalances in Japan’s budget allocations.

On November 19, the cabinet of Prime Minister Fumio Kishida approved a massive economic stimulus package worth ¥78.9 trillion (including private spending) and calling for ¥55.7 trillion in new government outlays. The assessment of independent analysts has been anything but glowing. On November 20, the influential Nihon Keizai Shimbun (Nikkei) weighed in with a blistering editorial under the headline “Not a smart stimulus.” The public’s reaction has also been cooler than anticipated. In the following, I attempt to explain how the Japanese government lost its way—and the public’s confidence—on fiscal policy.

During the campaign for the October 31 House of Representatives election, politicians from the ruling and opposition camps alike came under criticism for dangling competing promises of benefits and tax cuts without explaining how they would be financed. With the latest stimulus package, such pandering has assumed the status of government policy. Yet the plan’s populist centerpiece, a ¥100,000 cash benefit for children 18 and younger, has met with criticism in public opinion polls. And most economists believe that the effect of this bloated stimulus on economic growth will fall woefully short of the 5.6% increase in gross domestic product projected by the government.

To some extent, the erosion of fiscal discipline can be explained by the persistence of ultralow interest rates in recent years. As economic growth has stagnated in the developed world despite such measures, support has mounted for expansionary fiscal policies, even among professional economists (see my “Japan and the Global Embrace of Big Government”). In this climate, governments felt free to mobilize fiscal resources on an unprecedented scale to counter the COVID-19 pandemic and its economic fallout.

However, with the worst of the pandemic behind us and the specter of inflation looming, a global shift in attitudes is underway. Although the American Rescue Plan passed last spring was financed with US Treasury bonds, current thinking calls for tax hikes to finance the proposed American Jobs Plan and American Families Plan.[1] The British government announced plans to raise taxes last September. Germany, after temporarily cutting its value-added tax in July 2020, restored its pre-pandemic VAT rates in January 2021. In the context of current international trends, Kishida’s supersized economic package is a glaring anomaly.

As I see it, this fiscal folly is the product of a vicious circle of budget constraints, failed economic policy, and loss of public confidence. The problem originates in the government’s inability to raise taxes to keep pace with the soaring social security costs incurred by a rapidly aging society. It is compounded by the inflexible allocation of dwindling fiscal resources among agencies and programs, undermining the efficacy of public spending. Poor outcomes have eroded the voters’ confidence in government policy and made them even more resistant to tax increases, further exacerbating the problem.

Japan’s Problem Is Not “Big Government”

Given the magnitude of the nation’s public debt and budget deficits, people are wont to assume that Japan is a prime example of “big government.” In fact, Japan’s public sector is comparatively small, whether measured by the size of its civil service or by public expenditure relative to gross domestic product (see “Japan and the Global Embrace of Big Government”). As one can gather from Figure 1, which compares government spending in OECD countries as a percentage of GDP, Japan ranks low in terms of overall public expenditure. On the other hand, with the world’s oldest population, Japan naturally spends a hefty amount on healthcare and pensions (though still outspent by 10 European countries). However, if one excludes those social security costs, Japanese government expenditure as a percentage of GDP ranks very near the bottom. 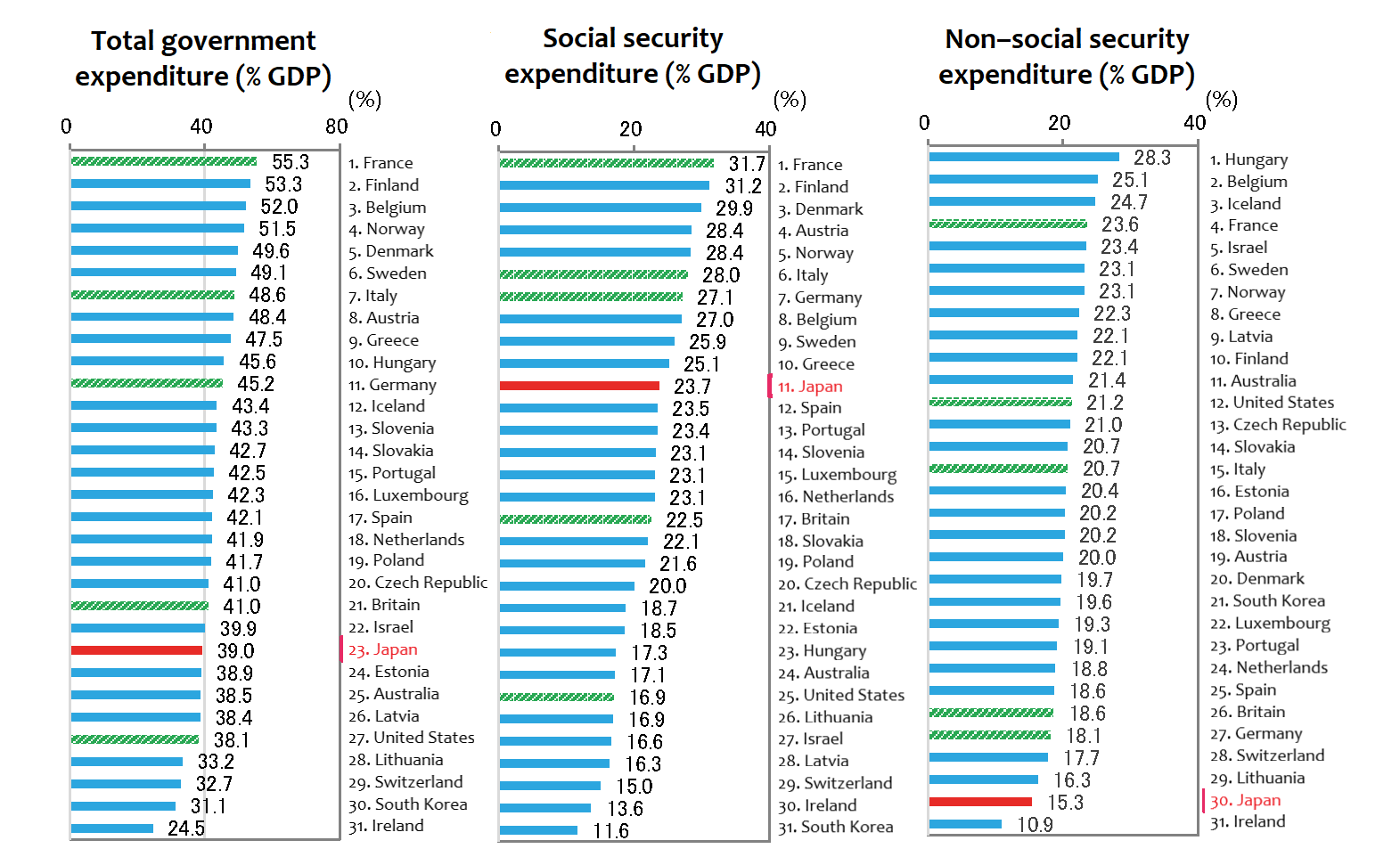 The simplest explanation for this lopsided spending pattern is that public resistance to tax hikes, despite rising social security costs, has forced the government to cut back in areas other than social security. In fact, after the consumption tax was adopted in 1989 as the main source of funding for social security programs, it took 30 years to nudge the tax rate up to 10% (far below Europe’s VAT rates, which averages around 20%). Even under Prime Minister Shinzo Abe, who faced relatively few political challenges during his record-breaking tenure, the cabinet felt obliged to postpone the last scheduled increase—from 8% to 10%—for three and a half years.

To compensate, the government has ended up raising social insurance premiums substantially over the past decade. These increases have received much less attention than proposed consumption tax hikes, but their impact on households’ disposable income is one important reason personal consumption has continued to stagnate (see Figure 2). 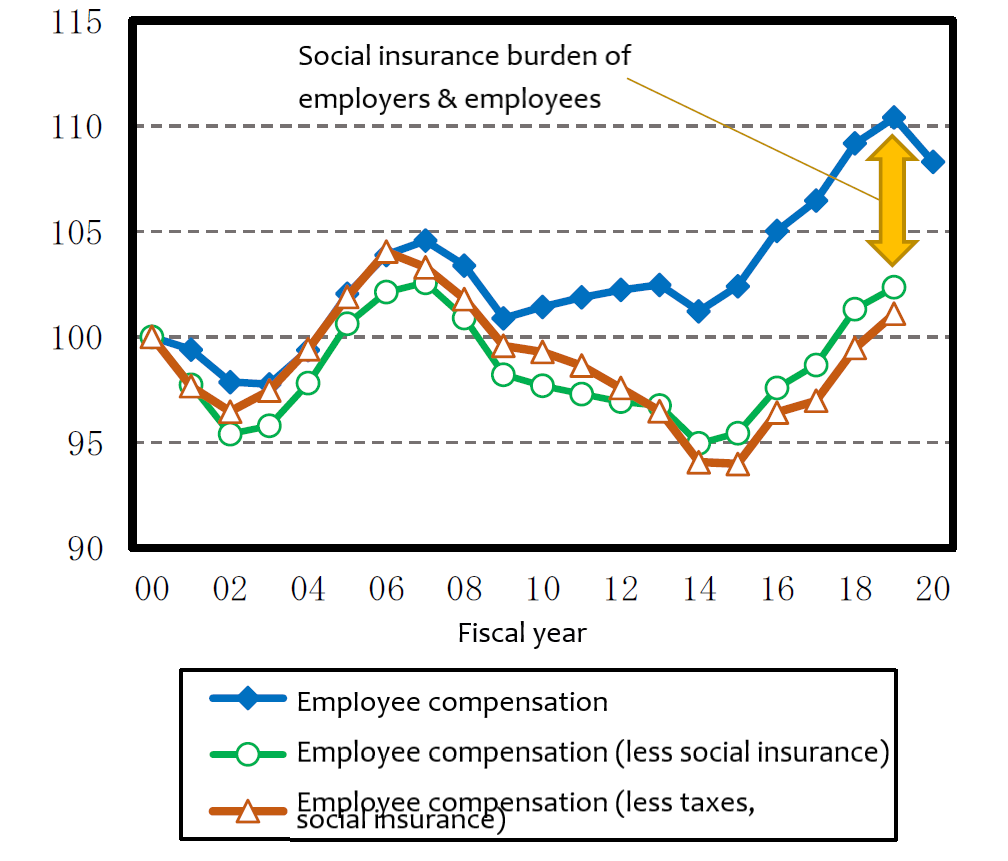 Scrimping on Education, Research, and Jobs

The upshot of all this is that, with a few exceptions—such as defense and subsidies for local governments—non–social security policies and programs have been subject to more or less uniform budget cuts. Government spending in three policy areas is important, though, from the standpoint of boosting the nation’s potential for economic growth: education, scientific research, and active labor-market policy. Let us see where Japan stands relative to other countries in its spending on these policy areas.

In terms of education expenditure as a percentage of GDP, Japan ranks close to last among the OECD’s member states, spending well below the OECD average (Figure 3). Of course, demographic structure is a contributing factor: Owing to Japan’s low birthrate, there are relatively few children to be educated at the primary and secondary level. But cuts in government subsidies to universities have hit students and families hard. Annual tuition for the national university I attended as an undergraduate was a mere ¥36,000 when I matriculated (and that was in the wake of a sharp tuition hike). Today, university tuition has risen to the point where the majority of college students rely on financial aid in the form of loans. The burden of paying off this debt after graduation has become a major social issue in Japan.

Figure 3. Composition of Total Public Expenditure on Education as a Percentage of Total Government Expenditure, 2018
(Primary to tertiary education)

Another area where government expenditure in Japan has languished is scientific research. As seen in Figure 4, the Japanese government’s contribution to total R&D spending is extremely low by international standards. It is true that Japanese corporations invest a great deal in R&D, but such research is naturally oriented to commercial applications. Without a more active infusion of public funds, basic research is bound to suffer, as Japanese scientists and academics, including Nobel laureates, have repeatedly warned.[2] 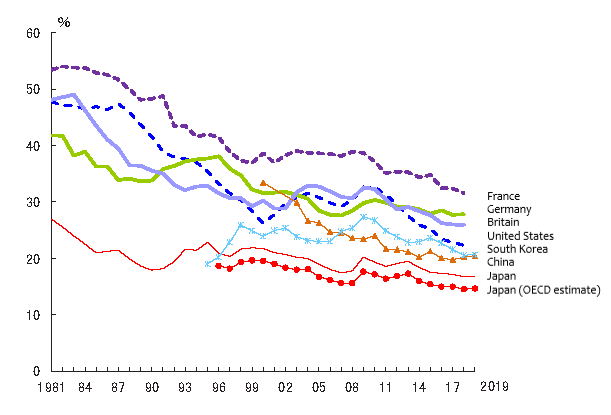 A third area crying out for more spending is active labor-market policies. Unlike passive policies, such as unemployment compensation and Japan’s employment adjustment subsidies (which pay employers to keep workers on the payroll), active labor-market policies are aimed at connecting the unemployed with new jobs by providing access to career counseling and job training. By focusing on “reskilling,” in today’s parlance, such policies support the reallocation of labor resources to growth industries instead of preserving jobs in established sectors (including those with no real future).

Particularly given the rapid transformation of industry by digitalization, a trend accelerated by the pandemic, the need for active labor-market policies seems self-evident. Unfortunately, Japan’s public expenditure on such policies relative to GDP is far below the OECD average and a fraction of what northern European countries allocate (Figure 5).[3]

Figure 5. Government Expenditure on Active Labor-Market Policies as a Percentage of GDP 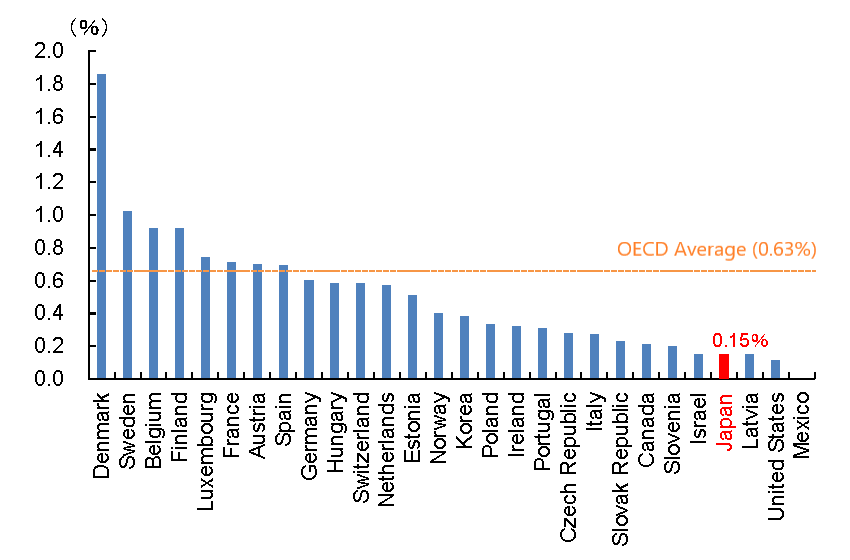 In the second half of this article, I will explore the connections between government expenditure and the economy’s long-term growth potential.

[1] The Federal Reserve Board has continued to insist that the current surge in prices is “transitory” in nature, but with inflation dragging on, and the consumer price index for all items excluding food and energy climbing to 4.6% over the last 12 months, the markets have lost faith in this optimistic assessment and are betting that the Fed will raise the policy rate sometime around the middle of 2022. The same inflationary trends are evident in Europe, and a hike in British interest rates is anticipated. The prospect of higher interest rates naturally raises concerns about the impact of deficit spending.