Japan and the Global Embrace of Big Government

Economic policymakers in the industrial world are abandoning the neoliberal orthodoxy that took hold in the 1980s and calling for greater fiscal intervention. What are the implications of this shift for post-pandemic Japan?

Economists and political leaders in the industrial world are moving away from the small-government philosophy that took hold in the 1980s and calling for a new era of active public-sector intervention. In the following, I examine the global shift in macroeconomic orthodoxy and its implications for the United States, Europe, and Japan.

The West on the Road to Big Government

The first major impetus for a shift toward bigger government was the loss of confidence in neoliberal economic theory in the wake of the global financial crisis of 2007–08. By the mid 2010s, a growing number of economists had begun questioning the potency of monetary policy and stressing the importance of fiscal intervention to address economic and social imbalances.

Then came the 2020 COVID-19 crisis, which forced governments worldwide to intervene more actively to protect the lives and livelihoods of their citizens—even to the extent (in many countries) of imposing citywide lockdowns. Suddenly, big government had become a matter of necessity rather than ideological preference.

As of this writing in June 2021, hopes are high in the industrial world that rapid progress in vaccinating the population (even in Japan, despite its slow start) will lead to economic normalization sometime between now and early 2022. But even if those hopes materialize, the impact of the pandemic seems likely to linger in the form of bigger, more interventionist government.

The most dramatic manifestation of this course shift has been in the United States, where the new administration of President Joe Biden lost no time in announcing three massive new spending programs totaling more than $6 trillion: the American Rescue Plan (ARP), the American Jobs Plan (AJP), and the American Families Plan (AFP).

The ARP is primarily a short-term relief and stimulus package, but the AJP and AFP both look beyond the pandemic. The AJP centers on investment in better-paying jobs, supported by corporate tax hikes, to help out the middle class and spur long-term economic growth. The AFP proposes a wide range of educational and social programs, supported by higher taxes on the wealthy, to alleviate income inequality. Together they signal a new orientation toward active public intervention in society and the economy via such mechanisms as industrial policy and income redistribution. This approach stands in sharp contrast to the orthodoxy of the small-government era, which viewed unfettered free-market activity as the key to economic growth and trusted the “trickle-down effect” to spread the benefits of that growth throughout society.

The change has been less abrupt in the European Union, which has always favored a bigger government than the United States or Japan. Nonetheless, a similar shift has been taking place in the EU, facilitated by the departure of Britain (which was generally more neoliberal in its philosophy than the other major leading members). At the height of the pandemic, the EU took an important step toward fiscal integration with last summer’s agreement to establish a joint pandemic recovery fund, expected to begin official operations any day now. The arrangement will allow the issuance of joint EU bonds to raise funds that can be used by countries like Spain and Italy, whose fiscal resources are relatively limited. This will greatly loosen constraints on government spending in the EU and provide the means for expanded public intervention in support of social and economic goals, with an emphasis on initiatives pertaining to climate change.[1]

Can we expect a comparable shift toward big government in Japan?

In the 1980s, the cabinet of Prime Minister Yasuhiro Nakasone charted a course for smaller government, much as Prime Minister Margaret Thatcher and President Ronald Reagan were doing in Britain and the United States, respectively. The administrative reforms launched around that time broke up and privatized such government monopolies as the Japan National Railways and Nippon Telegraph and Telephone. The size of government in Japan has shrunk substantially by most measures, but public perceptions have not kept pace with this reality.

Of course, there are several different ways to gauge the size of government, but when judged in terms of public sector employment, Japan ranks surprisingly low. According to the 2019 edition of Government at a Glance, compiled by the Organization for Economic Cooperation and Development, Japan’s public sector accounts for just 5.9% of total employment—far below the OECD average of 17.7% and a fraction of the share (around 30%) found in the Scandinavian countries. Indeed, as I see it, Japan’s sluggish government response to the COVID-19 pandemic, while partly a result of digital backwardness, also reflects the weak authority and insufficient staffing of local administrative agencies. Ironically, even now one frequently hears complaints about Japan’s bloated bureaucracy.

Japan ranks a bit higher internationally in terms of government spending, with overall expenditures amounting to 38.6% of gross domestic product in 2017 (see Figure 1). But this is due primarily to the magnitude of social security costs (including healthcare) in a nation where the elderly constitute a greater share of the population than anywhere else in the world. (Even so, Japan spends less on social security, relative to GDP, than 10 European nations.) In terms of expenditures excluding social security, Japan ranks near the bottom of the OECD, testifying to government’s limited role in Japanese society. This explains why a number of prominent Japanese economists have called on the government to bolster secondary and higher education, job training (or recurrent education), and safety net programs (particularly for the swelling ranks of non-regular workers).[2] At the same time, Japanese Nobel laureates and other scientists have issued dire warnings regarding the long-term consequences of cutbacks in funding for research. (Japan’s conspicuous failure to develop vaccines or therapeutic drugs for COVID-19 in a timely fashion has thrown the last issue into high relief.)

Figure 1. Government Spending as a Percentage of Nominal GDP by Country 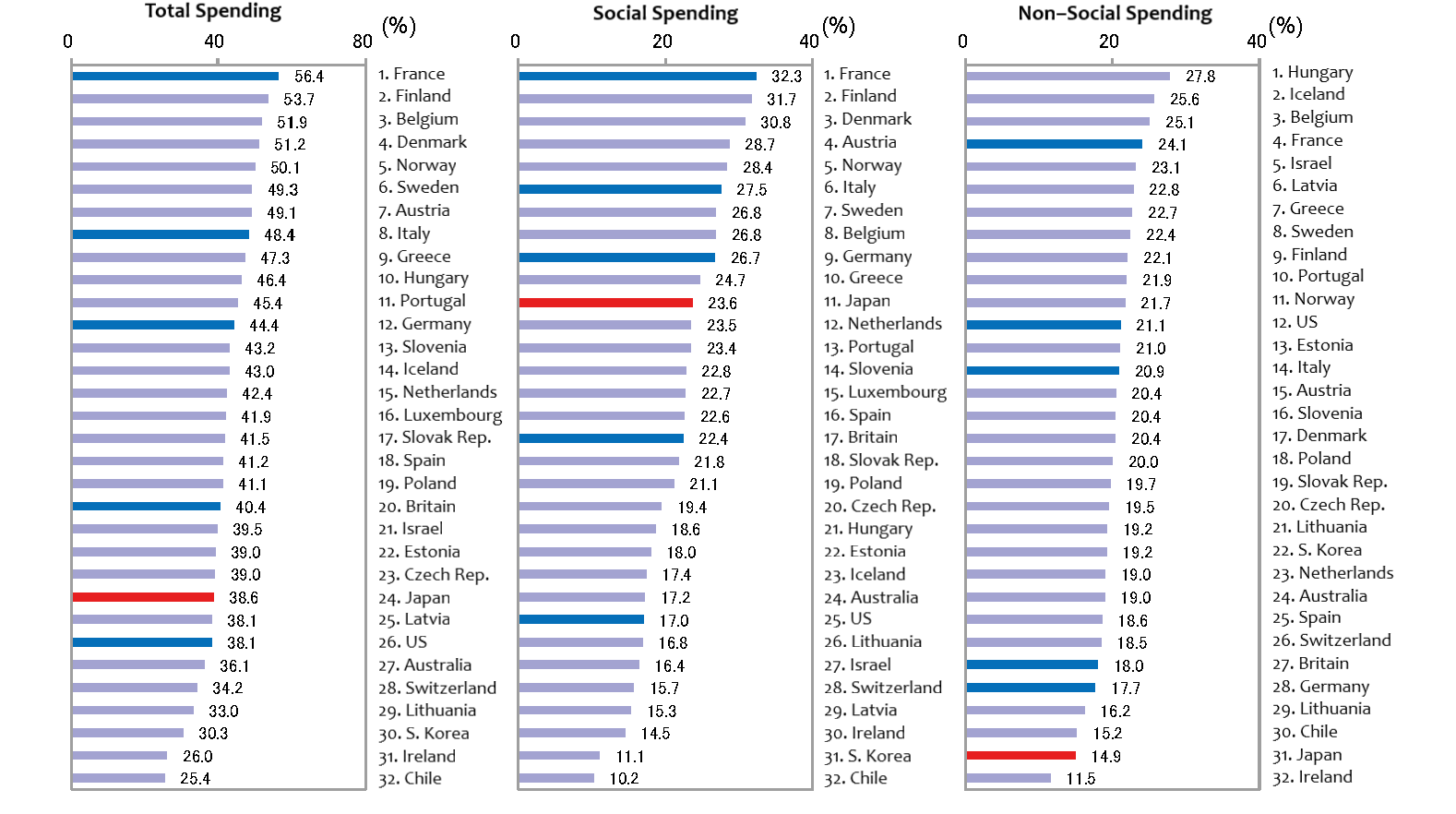 Unlike the German people, however, the Japanese are not especially committed to fiscal discipline, as is evident from the nation’s enormous public debt.[3] In fact, it was Japanese voters’ fierce resistance to higher taxes—despite the unavoidable and ongoing increases in social security costs—that forced the Ministry of Finance to impose caps on budget requests for programs other than social security. This is all that has kept government expenditures from exploding.

During the COVID-19 crisis, those budget caps were removed to open the way for emergency spending. In Japan as elsewhere, the government has dramatically stepped up its involvement in the economic life of the nation since the pandemic hit, imposing restrictions on economic activity and implementing various programs to mitigate the economic fallout. But the public reaction to this intervention has been less than enthusiastic. The Japanese people have little faith in their government, and the pandemic has done nothing to change their opinion. Without such confidence, it seems unlikely that the nation will actively embrace the idea of big government any time soon.

That does not rule out the possibility that fiscal discipline will erode, and the public sector will simply grow of its own accord. This would not be out of character for a government that has repeatedly revised its own timetable for eliminating the primary deficit. Under the cabinet of Prime Minister Jun’ichiro Koizumi (2001–06), the deadline was the beginning of the 2010s. After the global financial crisis, it was pushed back to 2020. Three years ago, it was extended another five years, to 2025. The most recent Basic Policy for Economic and Fiscal Management and Reform leaves the 2025 goal in place for the time being but calls for further review, and the consensus is that another extension is virtually unavoidable—particularly given the sharp growth in deficit spending during the pandemic. This pessimistic view is supported by the government’s own Economic and Fiscal Projections for Medium to Long Term Analysis, released by the Cabinet Office in January 2021 (Figure 2).[4] 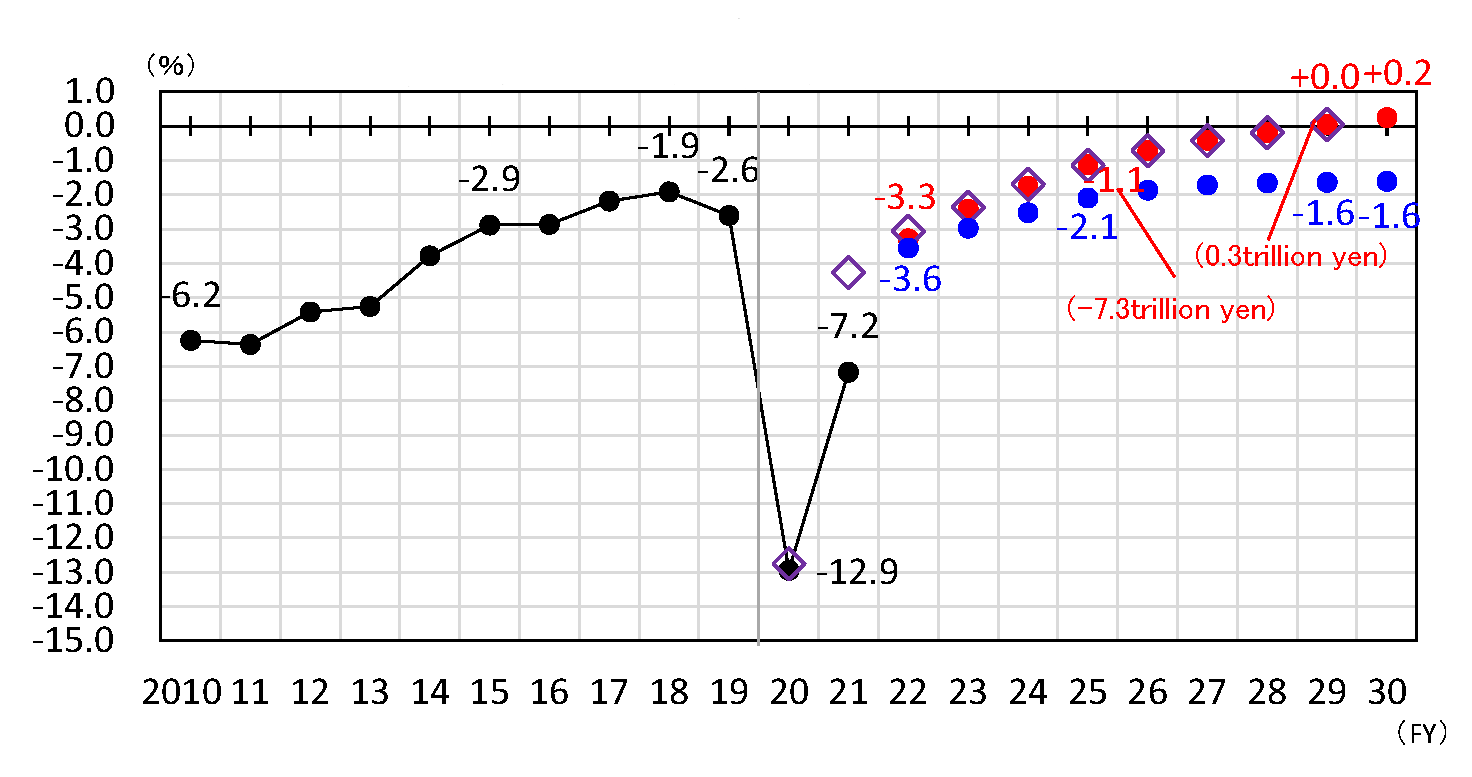 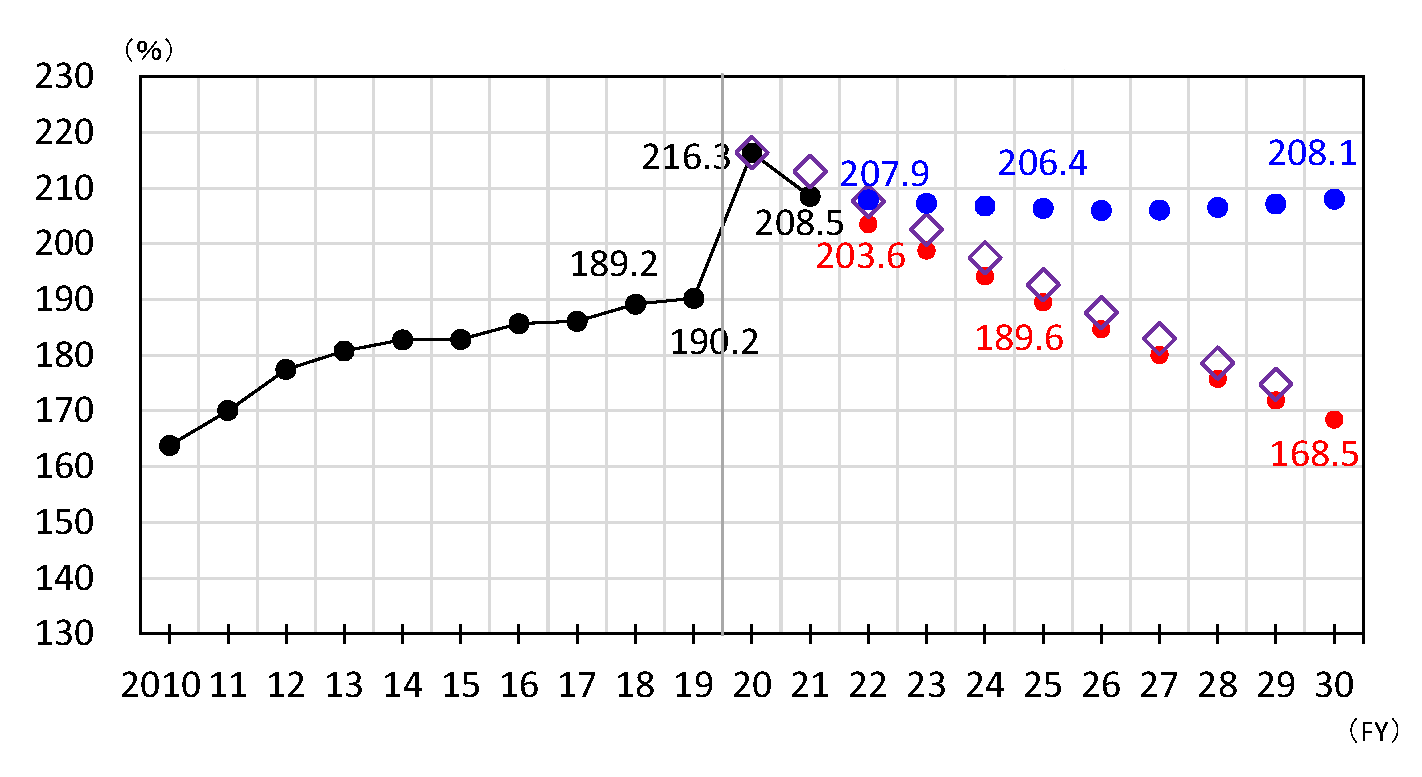 Despite massive public debt, and despite the government’s repeated failure to meet its own fiscal consolidation commitments, Japan has thus far escaped a fiscal crisis in the form of soaring long-term interest rates. The reason is that risk remains low provided long-term interest stays below the nominal growth rate. While this key condition is met, Japan can avert further growth in the debt-to-GDP ratio over the next decade, even without eliminating the primary deficit, as indicated by the blue dots (baseline scenario) in Figure 2.

But Japan’s very low long-term interest rates rest on two supports. One is massive purchases of Japanese government bonds by the Bank of Japan. The other is the persistence of low long-term interest rates throughout the industrial world, which has allowed the major Western economies to meet the same key condition. The assumption that this situation will continue for some time to come has led some mainstream Western economists to conclude that governments can well afford to boost public spending, despite high levels of debt.[5] However, we need to recognize the difference between American economists and policymakers who view the current climate of low interest rates as a once-in-a-lifetime opportunity for public investment in infrastructure and Japanese opinion leaders (especially politicians) who simply regard continuing low interest rates as an excuse to put off fiscal consolidation efforts.

Unfortunately, the West’s embrace of big government has the potential to wreak havoc with Japan’s complacency. To be sure, fiscal expansion in the West could fuel a welcome boom in Japanese exports. But it could also lead to a rise in long-term overseas interest rates—especially in the United States, where many still expect growth in government spending to unleash inflation. In Japan, where inflation continues to hover around zero, the Bank of Japan is unlikely to raise short-term rates. But if long-term US rates were to rise sharply, Japan would not be immune from the impact.[6]

Given the size of Japan’s public debt, even a small increase in long-term rates would mean a huge increase in debt service costs. Consequently, a sharp rise in foreign interest rates could force the Japanese government to take drastic steps toward fiscal rehabilitation. This could emerge as a major risk that the global trend toward big government poses for Japan.

[1] The EU’s lack of fiscal integration despite its use of a common currency is a basic flaw, and it contributed heavily to the European debt crisis of 2010–12. The EU’s monetary union prevented the devaluation of currencies in such heavily indebted countries as Italy and Spain, forcing drastic commitments all around to stabilize the eurozone. The COVID-19 pandemic hit Italy and Spain particularly hard, raising fears of another debt crisis. The decision by Germany and other leading EU countries to issue a joint European debt instrument represented a historic first step toward fiscal unification (dubbed “Europe’s Hamiltonian moment,” in reference to Alexander Hamilton, by the US media).

[2] Despite growing awareness among economists of the critical role of human capital in productivity growth, the share of Japanese public expenditures devoted to secondary and tertiary education and job training is extremely low, a problem discussed by Masayuki Morikawa (Seisansei: Gokai to shinjitsu, 2018) and Tsutomu Miyakawa (Seisansei to wa nani ka, 2018), among others.

[4] Even under the Japanese government’s growth scenario, represented by the red dots in Figure 2, Japan would not shift to a primary surplus until 2029, and most experts agree that the rate of nominal GDP growth posited in the growth scenario is unrealistically high.

[6] The Bank of Japan would attempt to counter such upward pressure by stepping up its purchases of JGBs under its “yield curve control” program. However, any loss of confidence in Japan’s long-term fiscal health would weaken the yen, potentially unleashing a cascade of rising prices and soaring long-term interest rates. (It should be remembered that the apparent effectiveness of the BOJ’s yield curve control to date owes much to the decline of long-term US rates since the fall of 2016.)