Symposium Report: Diplomatic Strategy in an Age of Globalization

Hideki Kato: Globalization has given rise to the increasing homogenization of economic and business rules, but at the same time there is also local diversity founded upon cultural traditions and religion. I believe the way to reconcile homogenization and diversity is through diplomacy. Today we welcome two distinguished scholars of international affairs, who are going to provide us with an international perspective on the subject of diplomacy in this age of globalization.

The Rise of China and Russia Threatens the World Order 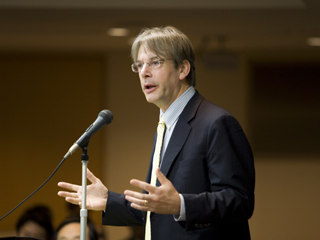 G. John Ikenberry: The United States played the leading role in maintaining the international order for 60 years following World War II. But in more recent times, factors such as the rise of newly emerging countries have resulted in the multi-polarization of the international community. This has caused a relative decline in US influence, and I believe the global community is now searching for a new world order.

Looking back on the period of US leadership, both Japan and West Germany were reintegrated into the world order not long after the war's end. In 1991 the East-West standoff known as the Cold War, centering on the confrontation between the United States and the Soviet Union, ended in the latter's fall and victory for the Western bloc. With totalitarianism beating a rapid retreat, the world embraced a liberal ideology based on the principles of freedom and democracy. This liberal world order, however, is now facing a crisis, owing primarily to the rise of China and Russia. These two nations have rapidly increased their economic power in recent years, but their politics are still marked by streaks of totalitarianism. As a result, deepening cooperation between China and Russia may result in the proliferation of anti-liberal, autocratic values and the division of the world into two camps: one of liberalism and one of autocracy. Some even fear this divide will lead to a nineteenth-century-style balance of power. Others worry that Asian and Western countries will square off on the global stage and a new East-West rivalry will emerge. The secondary cause of this crisis is the weakening of international institutions. As evidenced by the impasse over reform of the Security Council, United Nations member states are failing to reach consensus on key issues. The International Monetary Fund and the World Bank have completed their original missions and are in the process of seeking out new roles.

Such is the crisis facing the liberal world order. I believe, however, that it is possible to overcome this crisis by creating a new world order while adhering to the fundamental principles of liberalism. Although it is true that China and Russia are growing more powerful, they remain outmatched by the united strength of the world's developed countries. I believe that if the developed countries succeed in creating a new world order, it will be possible to bring China and Russia into this order and build a stable international community.

Han Sung-Joo: The administration of President Lee Myung-Bak was inaugurated in South Korea in February 2008. President Lee has advocated pragmatic diplomacy and began to put this into action soon after assuming the presidency by visiting the United States and Japan. His decision to resume imports of US beef provoked a fierce public backlash, however, and support for the administration has plummeted to below thirty percent. This has presented Lee with the challenge of reconciling diplomatic pragmatism with public sentiment. Dealing with the rise of China and Russia has also emerged as a major issue.

Looking back on US diplomacy in East Asia in recent years, at first President Bush took a hard-line stance toward North Korea, such as by labeling it a member of the "axis of evil" in his 2002 State of the Union address. In 2007, however, the Bush administration softened its stance and opened bilateral negotiations with Pyongyang; this policy change has been favorably received in South Korea and China.

Differences over human rights issues and the bilateral trade imbalance mean it is possible that US-China relations will deteriorate in the coming years. I believe that the next US administration should emphasize dialogue with China; for although the United States is currently the most powerful country in the world, it is no longer the only major power. Therefore, it should create a new world order and welcome emerging countries like China into this framework. Such an endeavor calls for strategic diplomacy, and here I believe an allegory that a Danish foreign minister once told me may prove useful. Denmark is a small country of around five and half million people. Because of its size, according to the allegory, Denmark has but three diplomatic paths open to it. One is to play the "good boy" by sticking with the major players and receiving a share of their spoils. The second is to play the role of "bad boy" and resist the policies of more powerful countries in order to wring concessions from them. The third option is to play the "smart boy" by adjusting its policies so that Denmark's own national interests coincide with those of its more powerful neighbors. I believe this third path is optimal for middle powers like South Korea, and it also offers advantages for major powers like the United States and China. 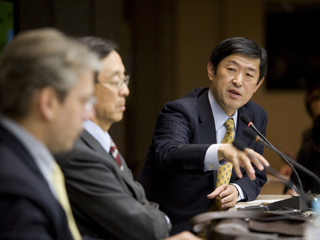 Shinichi Kitaoka: Professor Ikenberry, Chairman Han, thank you both very much. I have been following recent foreign policy issues and am keenly aware of the effects of globalization. This year the fourth Tokyo International Conference on African Development and the annual Group of Eight summit will be held in Japan, both of which have global topics on their agendas. And in discussions between Prime Minister Yasuo Fukuda and Chinese President Hu Jintao, who is currently visiting Japan, problems were addressed that are not strictly bilateral in nature—namely, the disturbances in Tibet and China's cooperation in preventing global warming. When Professor Ikenberry commented on changes in the concept of sovereignty, I was reminded of the period from 2004 to 2006, when I served as deputy permanent representative of Japan to the United Nations. During this time the concepts of "responsibility to protect" and "human security" gained some acceptance at the United Nations, which began intervening in the domestic affairs of sovereign states in order to safeguard human rights. Next I would like to ask Professor Ikenberry a question: How much of its international authority might the United States cede to the world community in order to create this new world order?

Ikenberry: It's clear that US power will decline in relative terms in the coming years. Realizing this, the United States wants a world order in which it remains a key player even after its decline. Reform of the United Nations is one way in which it will seek to maintain its influence; the accession of India and Japan to permanent membership of the Security Council is in line with US national interests. India, Brazil, and China's inclusion in the G8 would also be advantageous for the United States.

Han: On the subject of UN Security Council reform, I think that Japan's failure to become a permanent member can be partly explained by its own diplomatic ineptitude. First, Japan failed to gain the understanding of its neighbors regarding its desire to gain permanent membership of the council. Then, it refused a compromise that would have made it a permanent member without veto power.

Kitaoka: Now let's take some questions from the audience.

Question: How will the practice of intervention by the international community in domestic affairs for the purpose of protecting human rights develop in the coming years?

Ikenberry: Liberalism has traditionally sought to spread democracy in two ways: one is by intervening directly in the affairs of other countries, and the other is by exerting influence through international institutions. I think that as lessons are learned from the war in Iraq, the latter approach will become dominant.

Han: States that attempt to intervene in another nation's domestic affairs have each have different interests in the country in question. In some cases intervention has not gone as planned because differences in thinking stemming from these varying interests have prevented countries from acting in concert.

Question: Chairman Han, there seems to be fierce debate over history education in South Korea.

Question: Regionalism is spreading at the same time as globalization, as can be seen in the European Union and the Association of Southeast Asian Nations.

Han: I see regionalism not as a trend running counter to globalization but as a strengthening of intraregional cooperation within the larger current of globalization. 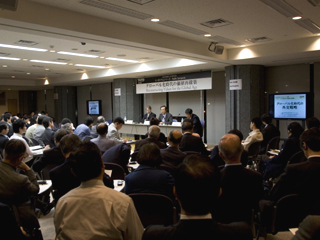 Kitaoka: On the subject of South Korean history education, I would like to mention that I'm serving on both the Japan-ROK and Japan-China Joint History Research Committees. When we look back into history, a variety of issues begin to emerge, such as doubts over whether Tibet can be called a part of China.

Regionalism tends not to run smoothly when one country is clearly more powerful than its neighbors; as it happens, neither Russia nor the United States belong to any regional alliances. Moreover, in order to establish a regional alliance that includes such major powers, I believe it's necessary for the member countries to share universal values.

This has certainly been a most worthwhile symposium. Professor Ikenberry, Chairman Han, thank you very much.