Hideki Kato: Conflicts are taking place in regions around the world. One way of interpreting this phenomenon is to view it as a struggle between value systems; namely, between those of regional societies and the forces of globalization. Our speakers today are Mr. Jakob Kellenberger, president of the International Committee of the Red Cross—which provides humanitarian assistance in conflict regions around the world—and Ms. Sadako Ogata, president of the Japan International Cooperation Agency, who for many years was involved in refugee relief as the United Nations High Commissioner for Refugees.

Jakob Kellenberger: The ICRC was founded by Swiss businessman Henry Dunant in 1983. Since then the organization has been protecting and caring for the victims of armed conflict worldwide. Today, our organization is active in more than 80 countries across the globe. In 2007 the ICRC assisted over 4 million internally displaced persons and benefited more than 14 million people in the fields of water, sanitation, and construction. More than 100,000 surgical interventions were performed in the hospitals supported by the ICRC. In terms of region, 43% of the ICRC's 2008 budget is earmarked for operations in Africa. We also give priority to such Islamic territories as Iraq, Sudan, Palestine, and Afghanistan.

There are many different aspects to ICRC activities; one is that our work involves being in close proximity to the people we set out to help. Thus the first operational challenge for us is to have access to all areas where there is conflict. From the initial assessment of the situation, ICRC staff workers are present in the field, striving to understand people's reality and vulnerabilities. For example, in Sudan we have offices throughout the country, and the 140 expatriates we have dispatched there work closely with some 1,800 Sudanese staff. Another key feature is our strict adherence to the principles of independence and neutrality. This explains why the ICRC refuses to side with any party in a conflict. These principles have enabled us to step in despite difficult security conditions when other organizations have had to leave.

The ICRC works closely with Red Cross and Red Crescent societies in countries around the world. The Japanese Red Cross, for example, provided essential medical assistance in Sudan, and it was among the first to send an emergency response unit after the earthquake that hit southern Asia in October 2005. In 2007 Japan ratified the statutes establishing the International Criminal Court to try perpetrators of genocide and war crimes. It also contributes to the cause of humanitarian assistance; advancing international humanitarian law covering the treatment of those wounded in conflict and prisoners of war.

Who Will Provide Post-conflict Reconstruction Assistance?

Sadako Ogata: I was involved in refugee relief as the UN High Commissioner for Refugees between 1991 and 2000. Our work had a great deal in common with that of the ICRC, and we maintained close contact at all times. Basing its activities on the UN Convention Relating to the Status of Refugees, the UNHCR provides protection and support to people who have sought refuge in other countries. Consequently, its work essentially ends when conflicts subside and refugees are repatriated. When armed conflict is no longer a major threat, moreover, the focus of international aid efforts shifts to reconstruction assistance to rebuild people's livelihoods.

This raises the question of who will provide such reconstruction assistance. This is not really the job of the UNHCR, since reconstruction is a domestic issue. The ICRC, moreover, is chiefly concerned with humanitarian aid under conflict conditions, so this is not the ICRC's job either. That said, because security has not been fully restored, it is difficult for development aid organizations like the Japan International Cooperation Agency, of which I am currently president, to step in. There is thus an aid vacuum for countries that have reached the post-conflict, reconstruction phase.

At the same time, post-conflict peace building requires the provision of dwellings and food to bring stability to people's lives. Under such circumstances, the international community must seriously address the question of how post-conflict, reconstruction assistance is to be provided. In this endeavor, I believe it is important to consider a broad range of options, including closer coordination between international agencies and nongovernmental organizations.

Japan's Falling Contributions to the ICRC

Shinichi Kitaoka: Thank you Mr. Kellenberger and Ms. Ogata for your remarks. I would now like to ask Professor Iwasawa and Director-General Tsuruoka to offer comments the presentations.

Yuji Iwasawa: I am currently a member of the United Nations Human Rights Committee. The International Covenant on Civil and Political Rights, which has been ratified by 160 countries, ensures the protection of physical integrity and such basic rights as the freedom of belief. While human rights laws like the convenant apply in times of both war and peace, international humanitarian laws, of which Mr. Kellenberger spoke, apply during armed conflict. Despite this difference, though, these laws overlap to a considerable degree, and they both play a valuable role in the provision of humanitarian assistance and peace building.

Koji Tsuruoka: Being a practical man, I would like to touch upon the issue of budgets. The ICRC operates on contributions from countries around the world. From the turn of the present century, Japan ranked around tenth in terms of the size of its disbursements; but there was a large cut last year, with the result that the country now ranks nineteenth. There are reasons for this, one of them being general cuts in the official development assistance budget. Another is the fact that the activities of the ICRC are not properly understood in Japan. We in the Ministry of Foreign Affairs are therefore eager to promote a deeper understanding domestically and to enhance our cooperation with the ICRC.

Kitaoka: The Japanese Red Cross Society was founded in 1877 to treat those wounded in the Satsuma Rebellion, so internationally speaking it has a very long history. But it appears that Japan's contributions to the ICRC are not in keeping with its international standing. With that thought, I would like to open the floor to questions from the audience. 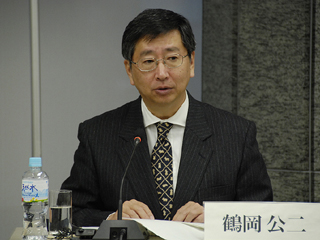 Question: There was talk about reconstruction assistance. Isn't there a way to promote the training of people who are interested in participating in such assistance?

Tsuruoka: The government of Japan is now in the process of promoting the concept of a “peace fostering nation,” so we hope that many people will seek to become involved in reconstruction assistance activities. At the same time, safety conditions tend to be poor in reconstruction areas, and often there are no utilities such as running water and electricity. It would be important, therefore, to provide thorough training in personal safety for the participants.

Kellenberger: The reconstruction phase is one of transition from war to peace, so there will be many dangers. The ICRC is an organization that typically operates under conflict conditions, and because there are few agencies capable of working under such dangerous conditions, we are also active during the reconstruction stage. We do not, however, offer any special training for aid workers during this phase.

Ogata: Some personal safety training is offered at the Tokyo office of the UNHCR, but I feel there is a need to expand such training programs.

Kitaoka: Professor Iwasawa earlier talked about human rights laws. Some people have maintained that severe punishment of crimes committed during times of conflict can hinder efforts to achieve an end to fighting.

Iwasawa: As a member of the Human Rights Committee, I had an opportunity last year to question Sudanese officials on penalties for the violation of human rights during conflict. I learned, though, that only lower-ranking soldiers were being punished and that penalties were generally insufficient.

Ogata: I remember in the Second Congo War that there were too many criminals for the judicial system to try all of them. It was necessary to improvise, for example by using traditional arbitration systems that had survived in various parts of the country.

Contributing to Peace-Building Efforts around the World 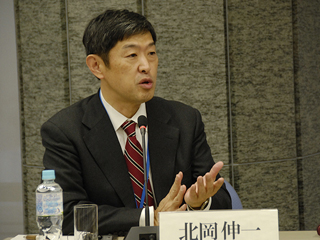 Question: There was mention of Japan's low contributions to the ICRC. I believe this is true not just in the financial sense but also in the number of personnel it dispatches to the organization.

Kellenger: Many of the staff members of the ICRC are European or North American, and so I believe we should open the door wider to human resources from Asian and Islamic countries.

Tsuruoka: I believe that having more Japanese staff in the ICRC would enhance the organization's international character. So I very much hope that we can meet Mr. Kellenberger's expectations.

Kitaoka: Japan has built a peaceful and prosperous nation in the postwar years. Today's symposium has left me with the impression that it is our international mission to contribute our experience to the peace-building efforts of countries around the world.