Sudan: Challenges for Peace and Reconstruction

The situation in Sudan is indicative of the need for enhanced African capacity in conflict management and resolution. The governments of developed countries, including Japan, should make it a priority to help build up Africa's capacity to maintain peace. 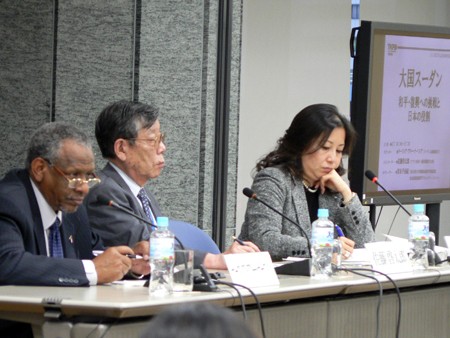 On March 7, the Tokyo Foundation hosted a symposium on "Sudan: Challenges for Peace and Reconstruction" focusing on what Japan can do to assist this large African country. The symposium was an open workshop held as part of the Foundation's United Nations Research Project, headed by Senior Research Fellow Shinichi Kitaoka. For this symposium, the Foundation invited Nafie Ali Nafie, adviser to the Sudanese president, who spoke on the conflict in Darfur, which has resulted in mass killings and millions of refugees, and the process of rebuilding the nation following the North-South conflict.

Presidential Adviser Nafie emphasized that the Comprehensive Peace Agreement of 2005 has been very effective in containing the conflict. He also pledged to respect the results of a referendum scheduled for 2011 in Southern Sudan on whether or not it remains a part of Sudan. Referring to the war in Darfur, he pointed out that it began as a traditional conflict between two tribes but escalated into large-scale war due to internal political factors and the conflict in neighboring Chad. While claiming that the government is ready to negotiate, Nafie also criticized the rebels for obstructing peace by refusing to come to the negotiating table.

The symposium was moderated by Chiyuki Aoi, a UN Research Project member and an associate professor at Aoyama Gakuin University. It attracted an audience of approximately 100 people, who listened intently to the presentations and participated enthusiastically in the question and answer session.

The following is a summary of the symposium.

Commentator:
Keitaro Sato, Ambassador in Charge of Conflict and Refugee-related Issues in Africa

Opening Remarks by the Moderator

Chiyuki Aoi opened the symposium on Sudan by noting that although there has been relative calm in North-South relations since 2005, conflict in the Darfur region has intensified. The countries of Africa are making efforts to resolve this conflict and promote the region's development through the African Union. Although the AU has been active in a number of earlier cases, the gravity of the situation in Darfur makes it a very important test case for the AU to prove its relevance and credibility in a peace-building role. A joint UN-AU mission has been authorized to replace the earlier AU mission in Sudan, and its activities have already been launched.

In 2006 the Darfur Peace Agreement was signed between the government and the Sudan People's Liberation Army/Movement, led by Mini Menawi. It has in effect been nullified, however, as two major rebel groups refused to sign it. Prospects for peace in Darfur would improve if the various rebel groups took a common stance.

The situation in Sudan is indicative of the need for enhanced African capacity in conflict management and resolution. The governments of developed countries, including Japan, should make it a priority to help build up Africa's capacity to maintain peace. Aoi concluded her opening remarks by asking what role Japan can play in Sudan with respect to both North-South relations and the Darfur conflict.

Sudanese Presidential Adviser Nafie opened his speech by outlining the wealth of natural resources available for exploitation in Sudan. There is huge potential not just in the oil sector but also in the mining sector, as Sudan has many mineral deposits. Sudan's real wealth, however, lies in its agricultural sector: The country has more than 2 million acres of arable land and plenty of water from underground reserves and three rivers. There is also ample rainfall, particularly in cereal-producing states. In the Gazera scheme, almost 2 million acres of land are under cultivation.

The government of Sudan came to the realization that the potential of the country could be developed first and foremost through self-reliance. Free market economic policy has been implemented, and the inflation rate controlled. Sudan faces challenges of development and reconstruction, but a reasonable rate of annual development has been realized; for a number of years the economic growth rate has been 8-11%. The number of public universities has increased from one to six, with growth, too, in the number of private institutions. Nine new airports and two seaports have been built, as have roads connecting the country's main cities. Yet it is not just in terms of infrastructure development that progress has been achieved: Sudanese telecommunication companies have now expanded their operations to provide services in West African countries.

The Sudanese government recognizes that the country has a long way to go in terms of development. It has formulated a strategic plan for the next 25 years, which will be reviewed every five years. Sudan needs to attract foreign investment because development needs cannot be met through just the government budget and the Sudanese private sector. When it became obvious that investment was not going to come from Western countries, the government looked east to Asia. Investment has come from Malaysia, Indonesia, Pakistan, China and the Gulf states and has been spread across the oil, agriculture, and real estate sectors. These investors are happy, because Sudan is not asking for donations but rather for relationships based on respect and mutual benefit. The government is willing to open the door to Japanese investors as well.

Sudan knew the country could not be developed if it was not at peace. The long North-South civil war ended in 2005. A peace agreement was initially hindered by lack of confidence between the government and the Sudan People's Liberation Army/Movement, but eventually, after very serious negotiations, a Comprehensive Peace Agreement was signed, including special protocols on security, wealth sharing, and power sharing arrangements. One of the requirements of the CPA is multiparty elections at all governmental levels by 2009: In preparation for this, a new election law will be passed in the next session of the parliamentary assembly in April. A census will take place on April 15 in order that new constituencies can be drawn in time for the elections. UN agencies have been providing technical assistance in the run-up to the census.

The conflict in Darfur began as a traditional conflict between two tribes in the northern part of the region but has been complicated by internal politics and the conflict in Chad. Most rebel leaders are members of the same tribe as the Chadian president; at first he did not support them, but subsequently pressures from within his own family forced him into alignment with the rebels in Darfur. The Sudanese government believes the conflict in Darfur has also been complicated by the interests of Western powers. It has been facilitating the operations of the African Union Mission in the Sudan (AMIS) and the United Nations Mission in Sudan (UNMIS), but the barrier to the resolution of conflict is that the rebel groups are not ready to negotiate with the government. There were at one stage 70 rebel factions, and although that number has decreased to 5, only 3 are moderates. The other 2 groups are not interested in reaching agreement with the other parties.

The government is assisting internally displaced persons who seek to return to their homes in areas where conflict previously occurred. It is rehabilitating schools and health centers and is grateful to the government of Japan for the help it is providing via the United Nations, though bilateral aid would be preferred. Sudan is approaching the fourth Tokyo International Conference on African Development (TICAD IV) with an open heart and mind.

Ambassador Sato began his commentary by pointing out that Sudan is bordered by nine countries and that problems often arise along borders that were determined by former colonial powers. It is difficult for the Japanese to relate to such complicated border issues because Sudan is seven times as large as Japan, which has no land borders.

Agricultural tribes and pastoral tribes have long lived alongside each other, which is an important fact to bear in mind when trying to understand the conflict in Darfur. Disagreements over access to water supplies led to the outbreak of conflict, when traditional methods of conflict resolution failed in recent years. The conflict has been exacerbated by groups seeking to gain political advantage from it. Had the CPA not been successful, the Darfur conflict might not have broken out, as some groups sought to meddle in the North-South peace process by adding fuel to the Darfur conflict.

The Japanese government is providing assistance to help internally displaced persons return to their homes and lead normal lives. Japan will continue to extend assistance to Sudan, not least because Japan itself cannot thrive unless there is peace throughout the world. The Japanese government must continue to make efforts to support marginalized people throughout the world.

Responses to Questions from the Audience

Nafie: Joint Implementation Units, formed from equal numbers of Sudanese government soldiers and Sudan People's Liberation Army (SPLA) forces, patrol the boundary between the southern states of Sudan and the rest of the country. The JIUs are supposed to be the nucleus of the new Sudanese army after 2011, provided that the people of the South do not vote for independence in the referendum scheduled for 2011. The Sudanese government hopes that the southern states will not separate from the country but will respect the outcome of the referendum, whatever the people decide. The government is working hard for unity.

Nafie: The success of the CPA may actually have encouraged groups in Darfur to resort to arms in order to claim rights, but if this was the case, it was based on a misunderstanding of the CPA, which afforded equal treatment - not special treatment - to the southern states. Maintaining the CPA is of far greater importance to the future of Sudan than resolving the conflict in Darfur.

Steven Wondu, Ambassador to Japan: Regarding the conflict in Darfur, progress toward conflict settlement has been held up by the fact that it was not clear with which rebel groups the government should be negotiating. This is in contrast to the CPA, which materialized because the SPLA/M had a unified command structure enabling decisions to percolate down.

Nafie: The International Criminal Court has been given a mandate by the UN Security Council to indict two Sudanese individuals, one a member of the government and one from the militia. From the government's perspective, these indictments are null and void because Sudan (like the United States) is not a party to the ICC, meaning it has no right to meddle in Sudanese affairs.

Two oil fields are still available for development in Sudan, and there is great potential for investment in the petrochemical industry. The government can guarantee security for investors.

One role suggested for Japan would be to help resolve issues in Sudan within the context of a regional framework.