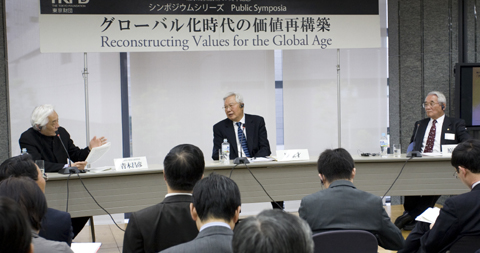 Hideki Kato: Today human rights, freedom, and equality are regarded as international norms, but the substance behind these words varies by country and culture. Today, we will hear from our distinguished guest Luo Haocai on the subject of China’s governing system, and I hope we can come to a deeper understanding of human rights and democratic reform in China.

Harmonizing Government and People Through Xieshang

Masahiko Aoki: Mr. Luo served as vice-chairman of the National Committee of the Chinese People's Political Consultative Conference until March this year. He is currently president of the China Society for Human Rights Studies, which is a member of the Conference of NGOs in Consultative Relationship with the United Nations. He has also worked to develop Peking University's Soft Law Center, devoted to the study of customary law and other quasi-legal means of dispute resolution. 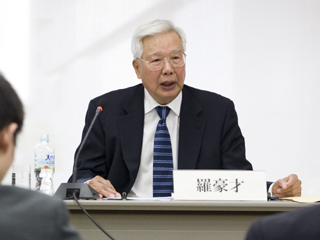 Luo Haocai: Before launching into my talk, I would like to thank the Japanese people for their generous assistance in the aftermath of the recent Sichuan earthquake.

Today I would like to center my discussion on China's xieshang , or Consultative Mechanism. Although the character shang in xcieshang often refers to commerce, xieshang really has nothing to do with commerce in the economic sense; rather, it means something along the lines of "consultation" or "dialog." China has achieved dramatic economic growth as a result of its shift from a planned economy to a market economy, and it has been pursuing parallel reforms in the political sphere as well, moving from rule by individuals to the rule of law and downsizing government. Reviewing the evolution of China's governing system, we can see that during the time of the planned economy, it worked in a top-down manner, with the public authorities issuing orders and the people following them. As political reform progressed, however, China has shifted to a system of mixed governance, in which the people participate with the public authorities in decision making. The method we use to iron out the differences between government and the people is xieshang .

Let's look at an example of xieshang . The Chinese People's Political Consultative Conference, of which I was vice-chairman of the National Committee, was established in 1949, and its origins are closely tied to the inauguration of the Central People's Government. Today not only the ruling Communist Party but also eight other parties, as well as various other organizations, take part in the Consultative Conference, which holds deliberations concerning national policy, government personnel, and legal matters more than ten times a year. In these conference sessions the participants discuss the issues on an equal footing with one another, and anyone can propose a change in the agenda or bring up a new item. Conclusions are reached on the basis of rational deliberation and persuasion, not imposed by government fiat. Furthermore, the same sort of conferences function at the regional and business level, establishing local and industry codes and regulations through consultation. Viewed historically, xieshang is associated with such key Confucian values as conciliation and harmony, which the Chinese people continue to embrace even today. That's why I believe that the xieshang mechanism can make an important contribution to the development of democracy in China, and why I am working to institutionalize and standardize this mechanism.

Another element that plays an important role in China's governing system is "soft law." These days law generally takes the form of "hard law," which is codified and mandated by the state. But there are also rules and norms that don't take the form of codified law, such as custom and precedent. This is what we mean by soft law. Soft law exists in every society, but it has played a more prominent role in China than elsewhere because the hard-law framework was less developed in China.

Next I'd like to talk about human rights in China. As a permanent member of the United Nations Security Council, China has worked to promote human rights within the framework of the UN Charter and the Universal Declaration of Human Rights. China is also a signatory to more than 20 international human rights pledges, and it has participated actively in the UN Commission on Human Rights and the UN Human Rights Council. At home, after wide-ranging public debates, China amended the Constitution in 2004 to include the provision, "The State respects and preserves human rights." We have also enacted a series of laws to support human rights, such as the Administrative Procedure Law and the State Indemnity Law, and we are making progress on amendment of the penal code and civil code.

It is true that China still has many unresolved human rights issues. But there is no denying that the concept of human rights and the approach to their protection vary from one society to another. It is vital that we respect these differences and learn from one another's strengths. By so doing, we will also be advancing the cause of human rights worldwide. 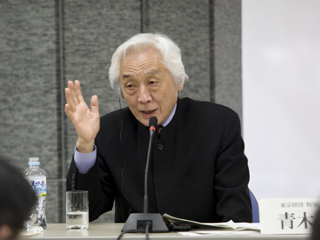 Aoki: Thank you so much Mr. Luo. As you have pointed out, a society's concept of human rights changes as the society evolves. Take the United States as an example. I was studying in the United States in the 1960s during the heyday of the civil rights movement, which was fighting to secure equal rights for African Americans. Reverend Martin Luther King Jr., the foremost pioneer of that movement, was assassinated in 1968. Now, 40 years later, an African American, Senator Barack Obama, has been chosen as the Democratic candidate for President. I have been deeply moved to see the progress that US society has made in guaranteeing equal rights for African Americans during this time.

The other member of our panel, Mr. Akio Harada, has served as prosecutor general of Japan. He served as first secretary at the Embassy of Japan in Washington, DC, during the 1970s and was involved with soft-law matters in connection with the Lockheed Incident. He also has numerous acquaintances in Chinese legal circles. Mr. Harada, could you comment on Mr. Luo's remarks? 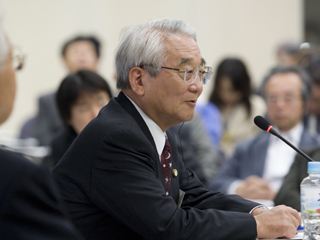 Akio Harada: China is a country made up of many ethnic groups, with considerable religious and cultural diversity. Preserving harmony and promoting development amid such diversity is no easy matter, and I imagine the governing system Mr. Luo has described developed out of this climate. Your reference to xieshang called to my mind a related word, hexie , which I believe corresponds to the Japanese chôwa (harmony or concord). This was originally a Confucian term, and its influence can be seen in the very first statement of Shôtoku Taishi's Seventeen-Article Constitution: "Harmony is to be valued." In present-day China hexie remains a key principle of leadership. Whenever I travel to China I see the characters for hexie , whether in Beijing or the countryside. I believe that the ethic of harmony that prevails among a people who place so much value in these words has helped propel China's development. Today, however, globalization is making market principles supreme throughout the world, opening the way for an epidemic of speculative money games all around the globe. I feel that there is something wrong with this picture. It seems to me that harmony and dialogue are essential to human society. I also believe that these concepts of hexie and xieshang can stand us in good stead as we work to promote harmony and dialogue.

Aoki: Thank you, Mr. Harada. Next we'll take questions from the floor.

Question: As many as 10,000 people are executed in China every year. What are your views on this?

Luo: It's true that China imposes severe penalties on its criminals. But I don't think there is much chance of their being significantly lightened any time soon.

Harada: In Japan, death sentences and executions have both become much less common. European countries and the UN criticize the persistence of the death penalty in Japan, but more than 80 percent of the people favor keeping it.

Luo: In China judges use their own discretion in passing down verdicts, and we also have a system of appeals. I think this guarantees a certain degree of independence. Still, there is room for reform, and China is carrying out such reform gradually and incrementally. I support an incremental approach to reform because radical reforms have the potential to lead to social unrest.

Harada: Efforts to nurture the legal profession have really taken off in China. About five years ago China adopted an examination system comparable to Japan's national bar exam, and the universities' law schools have expanded dramatically in recent years. This trend should also have the effect of enhancing the independence of the judiciary and the courts.

Aoki: What sort of debates are going on in China with respect to reform of the justice system?

Luo: There are a number of debates. One focuses on the question of who should function as a check on the judiciary. With regard to administrative litigation, there are some who argue for establishing a system for settling lawsuits out of court, such as arbitration. Then there is the issue of state indemnity. Before the new law, disputes between Chinese government organs and citizens were settled privately using cash reserves. This practice lacks transparency, but it's an example of soft law that still has a very strong hold. As you can see, the Chinese justice system still has many unresolved issues. That's why I believe we must continue to move ahead with reforms, learning from systems in use in other countries, such as Japan. 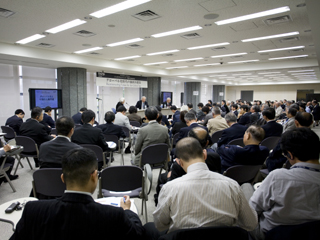 Aoki: Your mention of arbitration brought to mind an American study carried out in the Shanghai area. According to the findings, an increasing number of civil cases are being decided in the courts, but at the same time, an increasing number are also being settled through out-of-court negotiations between attorneys. Another American researcher carried out a study of Japanese methods for resolving cases involving automobile accidents and found that there was no major difference in the outcomes between cases settled out of court and those resolved by litigation. For this reason, the report concluded that it was a rational decision for the Japanese to lean toward out-of-court settlements. But out-of-court settlements can only function where there's a court system. I think this is an excellent example of the way hard law and soft law can complement one another.
Unfortunately, we seem to have run out of time. I'd like to thank both of our panelists for joining us today.