Our ocean was once regarded as having a boundless capacity to absorb the byproducts of human activity. But ocean warming and acidification, along with the problem of marine plastics, have shown that there are limits to what our ocean can accommodate. Recent research on planetary boundaries that define the “safe operating space for humanity” has highlighted just how fragile the Earth’s system may be. That said, the ocean is not just at the mercy of human excesses; it has mechanisms to not only clean itself but also to adjust the planet’s climate.

One particularly noteworthy function is the ability of seagrass meadows, salt marshes, and mangrove forests—collectively known as the blue carbon ecosystem—to absorb and effectively store carbon dioxide and other greenhouse gases, acting essentially as a natural “carbon capture and storage” mechanism. Such coastal habitats are fast disappearing, however, due to land reclamation and water quality degradation. Our top priority should thus be to conserve existing blue carbon ecosystems and, if already lost, to either rehabilitate or restore these valuable marine carbon sinks. Many such mitigation strategies are already being implemented in locations around the world.

In the following, I will describe the features and status of vegetated coastal habitats, explain the use of carbon credits in promoting the conservation and restoration of coastal zones, and introduce the initiatives being advanced in Japan.

What Is a Blue Carbon Ecosystem?

The term “blue carbon” first appeared in a report issued in 2009 by the United Nations Environment Program[1] to indicate the carbon that becomes bound or sequestered in the seas and oceans, in contrast to the “green carbon” stored in forests and their soils. The report noted that vegetated coastal habitats like mangrove forests, seagrass meadows, and salt marshes are particularly important carbon sinks that can store carbon for up to thousands of years in the soil, where, under anaerobic conditions, organic matter will remain largely undecomposed. Blue carbon ecosystems are among the most intense carbon sinks in the biosphere and have become a focus of conservation efforts for their role in helping remove CO2 from the atmosphere and mitigate global warming. 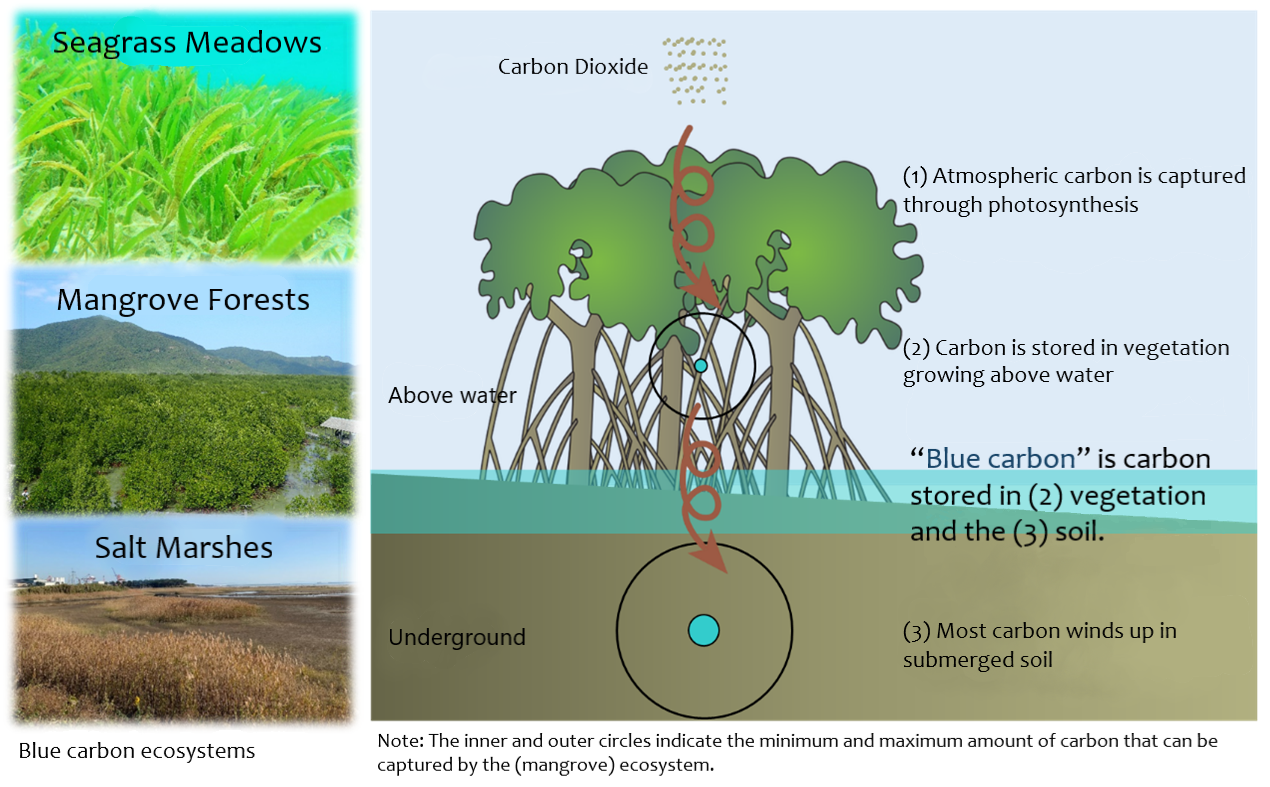 One reason vegetated coastal habitats are receiving heightened attention is because of their alarmingly rapid global decline due to coastal development and water quality deterioration, which adversely affects underwater irradiance. The vast amount of blue carbon that is stored in sediment may be released during coastal development projects and contribute to further global warming. Indonesia, for example, is home to 23% of the world’s mangroves; experts report that although annual mangrove deforestation in Indonesia is only 6% of its total forest loss, if this were halted, total CO2 emissions would be reduced by up to 30% of estimated annual emissions.[2] Conserving blue carbon ecosystems will thus mean not only preserving valuable carbon sinks but also avoiding large-scale emissions, and the restoration of such habitats will generate new sinks.

While the conservation and restoration of blue carbon ecosystems would clearly be beneficial in mitigating climate change, their degradation and loss have continued unabated. One reason for this is the lack of financing schemes and market incentives to support conservation efforts.

There are two types of market mechanisms for climate change mitigation through carbon offsets. Compliance carbon markets are driven by regulatory caps and include the UN Clean Development Mechanism and Japan’s Joint Crediting Mechanism and J-Credit Scheme. Companies purchasing credits on these markets tend to seek the lowest prices, regardless of how the credits are generated.[3] Voluntary carbon markets, meanwhile, encompass transactions by companies that strategically seek to prioritize carbon offsets, such as to fulfill their CSR pledges or contribute to the SDGs. Blue carbon credits have largely been traded on the latter, as this allows purchasing companies to claim a role in the protection of coastal ecosystems, even if the credits are somewhat costlier than those on the compliance markets.

Various organizations have developed standards for and manage voluntary carbon markets, notably Verra in the United States, Switzerland’s Gold Standard, and Plan Vivo in Britain. Plan Vivo was the first to generate blue carbon credits through a community-led mangrove conservation and restoration project in Gazi Bay, Kenya. Called Mikoko Pamoja, the project involves the Kenya Marine and Fisheries Research Institute and several British and US groups to serve as coordinator and provide international funds. Proceeds from the sale of credits generated on 117 hectares of mangrove forest have been allocated to promote mangrove ecotourism, improve educational facilities, enhance access to clean water, and create community employment. While Plan Vivo’s methodology does not target sediment stability, despite its key role in carbon sequestration, the project has emerged as an important model for community-based efforts and is inspiring similar initiatives in other parts of Kenya, as well as in neighboring Tanzania, Madagascar, and Mozambique.

Verra, meanwhile, has focused on developing methodologies to quantify the real greenhouse gas benefits of blue carbon ecosystems. In 2015, it announced the VM0033 methodology for tidal wetland and seagrass restoration, revising the methodology as VM0007 in September 2020 to include tidal wetland conservation and restoration activities. This was applied in Cispatá Bay in the Gulf of Morrosquillo, Colombia, resulting in the world’s first mangrove conservation project to separately account for soil organic carbon in sediment. Supported by Conservation International and Apple, the project covers 11,000 ha of mangrove forests and generates approximately 33,000 tCO2e[4] of credits each year. Apple purchased 17,000 tCO2e on May 25, 2021, using this to offset its comprehensive carbon footprint for fiscal 2020.

Verra is also currently studying a 60-year mangrove conservation and restoration project in southeastern Pakistan’s Sindh Province encompassing an area of 350,000 ha. The project could generate 1 million credits (1 credit = 1 tCO2e) in 2021 and eventually expand to around 2 million tCO2e per year. Other mangrove projects, many of them on an increasingly larger scale, are being planned for Mexico and Senegal. Projects targeting seagrass meadows and salt marshes using the VMoo33 methodology, meanwhile, have yet to be registered. 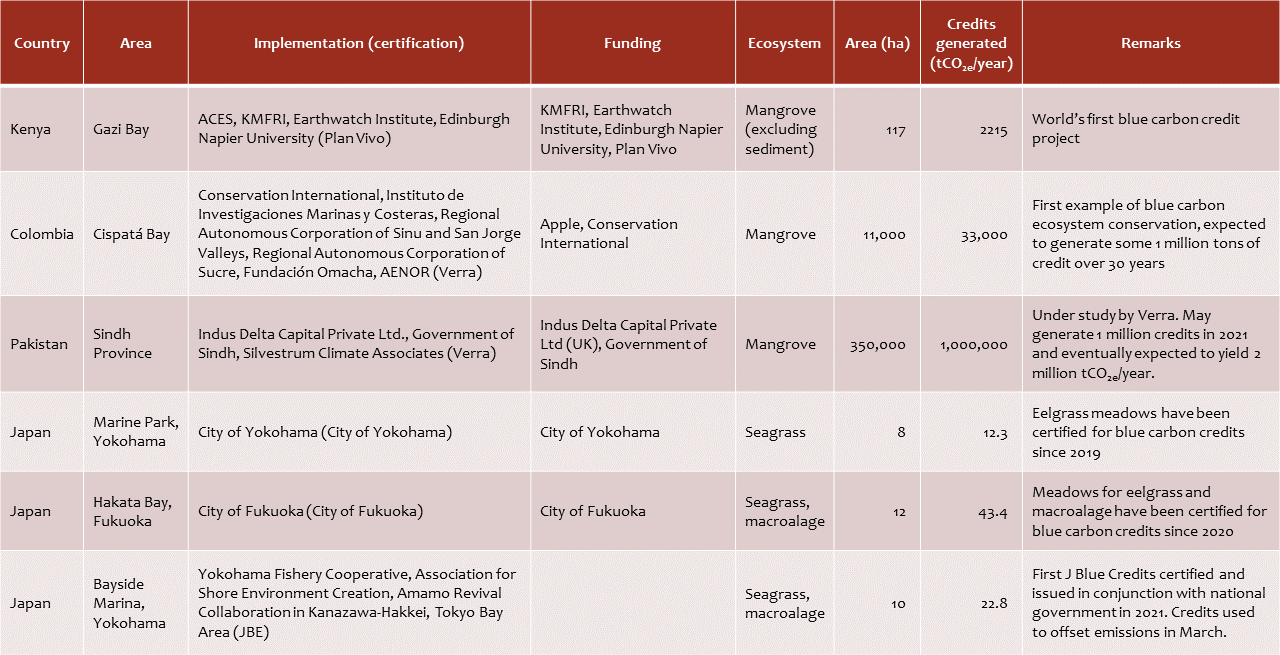 Finally, I would like to turn to projects that are being implemented in Japan and to offer a prognosis for the future. Most vegetated ecosystems along Japan’s coast are either seagrass meadows or macroalgal (kombu and wakame) habitats, although there are also mangrove forests in subtropical areas of Okinawa and Kagoshima. By area, there are 620 km2 of seagrasses, 470 km2 of salt marshes, 30 km2 of mangroves, and 1,720 km2 of macroalgae habitats.[5]

From February 2017, a number of researchers began meeting to explore the potential for blue carbon sequestration and develop monitoring methods, with government representatives participating as observers. And in June 2019, the Ministry of Land, Infrastructure, Transport, and Tourism established a study group to examine how blue carbon ecosystems can contribute to the prevention of global warming.

Many coastal regions, meanwhile, are taking the initiative to create voluntary markets by drawing on their blue carbon resources. In September 2019, for example, the city of Yokohama certified credits for the eelgrass beds growing in the municipally managed areas of Marine Park, leading in December to the first use of blue carbon credits generated in Japan to offset emissions. A blue carbon offset program was established by the city of Fukuoka in 2020 for eelgrass and macroalgal habitat conservation and creation in Hakata Bay, resulting in the sale of certified credits and carbon offsets later in the year.

In addition to these initiatives at the municipal level, in July 2020 the minister for land, infrastructure, transport, and tourism authorized the establishment of the Japan Blue Economy (JBE) Association to advance climate change mitigation and adaptation measures in coastal and maritime areas.[6] The JBE created the J Blue Credit system in fiscal 2020, reviewing, certifying, and issuing credits as part of a demonstration experiment in building a financial mechanism methodology. Following verification by an external third-party committee in January 2021, the first J Blue Credits were issued on February 2 for seagrass and macroalgal meadows in Yokohama’s Bayside Marina. The credits were purchased on the voluntary carbon market and used as offsets in March.

As these examples suggest, Japan is at the forefront of efforts to establish blue carbon credits for seagrass and macroalgal meadows. These conservation and restoration initiatives are distinguished by the central role played by fishery cooperatives and local nonprofits. Although still quite small in scale, the projects benefit from the personalized nature of interaction among participants, inviting input from local residents and the interest of credit purchasers. Tasks for the future include drafting blue carbon ecosystem guidelines and launching additional projects. More municipal and prefectural governments with vegetated coastal habitats should be encouraged to utilize blue carbon in their greenhouse gas reduction policies.

As for the future of blue carbon, its global presence is likely to steadily grow, given the advances being made both institutionally and scientifically. The Taskforce on Scaling Voluntary Carbon Markets (TSVCM), established in September 2020 as a private sector-led initiative to scale an effective and efficient voluntary carbon market, cites the potential of nature- and ecosystem-based capture and storage, while also pointing to such issues as the time lag between initial investment and the accruing of credits. Systems for blue carbon credits in Japan are also likely to expand, but a formula may need to be developed to achieve compatibility with credits earned abroad by Japanese firms. Domestic participants will thus need to keep an eye on international voluntary carbon market trends. Japan is a leader in kelp research and should actively disseminate findings that relate to blue carbon to contribute to the work of the Intergovernmental Panel on Climate Change in developing methodologies and formulating guidelines.

[5] The UNEP’s Rapid Response Assessment concerning blue carbon cited above did not include macroalgal beds in its definition of a blue carbon ecosystem, reasoning that such habitats—unlike seagrass meadows, salt marshes, and mangrove forests that store carbon in sediment—do not bury carbon, as macroalgae grow on rocky substrates, making their blue carbon difficult to quantify. Algae-growing areas are of immense size, however, particularly when macroalgal farms are included, and have great carbon sequestration potential. There is thus growing worldwide momentum for their inclusion as blue carbon sinks.

[6] As a director, the author is a member of the JBE executive board. Among JBE partner organizations is the Sasakawa Peace Foundation.