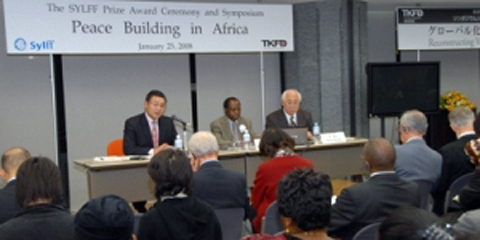 Sadaharu Kataoka, President, Waseda Institute of International Strategy: The conflict in the Democratic Republic of the Congo, which is one of the major nations of Central Africa, started in 1998 and has so far claimed the lives of 5.4 million people. This is the biggest conflict in the history of Africa and is known as the Great War of Africa. This conflict has two particular features. The first of these is the involvement of the surrounding countries, in that the war is not just an internal struggle of forces within the Congo, but countries surrounding the Congo have also sent in their troops. The second feature is natural resources. The conflict takes the form of a confrontation among internal forces and the surrounding countries, but the background to the conflict can be seen as a scramble for mineral resources and land.

President Joseph Mobutu seized power in the Democratic Republic of the Congo in 1965 and wielded dictatorial power. Mobutu's regime was overturned in 1997, and conflict broke out in the Congo the following year. A democratic presidential election was held in 2006, and the elected president, Joseph Kabila, is currently in power. The biggest challenge facing the Kabila government is ending the conflict, but the Congo is still facing the negative legacy of colonial rule and the Mobutu dictatorship. Also, because the surrounding countries have entered into the conflict, it cannot be resolved by the Congo alone. The peace-building process in the Congo thus calls for diverse activities carried out by a range of actors, which must include the cooperation of the international community, alongside efforts made internally by the people of the Congo.

Struggles for rich natural resources breaking out in areas across Africa

Hiroyuki Ishi, Professor, Hokkaido University Public Policy School: There have been frequent outbreaks of conflict in regions across Africa in recent years. Data for 2006 shows that of 43 conflicts that broke out across the whole world, 12 were in Africa. Also, of the eight countries to have sanctions imposed by the United Nations, seven were in Africa. Africa has rich mineral resources buried underground, including crude oil, diamonds, and copper, and for this reason there are many conflicts over resources. Of the 12 conflicts in 2006, 10 were related to resources.

As an example of conflict over resources, I would like to talk about Sierra Leone in West Africa. Sierra Leone is one of Africa's poorest countries, yet it is known for its high-quality diamonds. An antigovernment army rose up in revolt over the rights to these diamonds in 1991. Neighboring Liberia gave its support to the antigovernment army, which was able to purchase arms and ammunition with the proceeds from diamonds smuggled out of the country. The internal conflict continued this way until a cessation of hostilities finally came about in 2002. However, the diamond rights are still firmly in the hands of the military, government officials, and other privileged classes, while many of the country's people live in poverty.

I would like to talk about another conflict, this time the one that broke out in Rwanda, a country with scarce mineral resources. Rwanda is located on the eastern side of the Democratic Republic of the Congo. Ethnically, it is composed of the majority Hutu, an agricultural tribe, and the minority Tutsi, a stock-farming tribe; the two tribes coexisted, albeit in a state of tension. However, during the latter half of the twentieth century the population of Rwanda increased sharply, raising the necessity to acquire new land in order to feed the newly increased population. Disputes over land developed into conflict along tribal lines that ultimately led to the Rwandan Genocide of 1994, in which Hutu extremists massacred ethnic Tutsis and Hutu moderates. Some one million people, roughly a seventh of the whole population of the country at the time, are believed to have died in the genocide, and 1.4 million fled to other countries as refugees. Conflicts such as these over mineral resources and land break out frequently in Africa, making it even harder to escape poverty. The vicious circle continues.

Rigobert Minani-Bihuzo, winner of the Second SYLFF Prize and Representative, NGO Groupe Jérémie: The history of the conflict in the Democratic Republic of the Congo dates back to the period of the Mobutu regime's collapse in 1997. After the Mobutu regime was brought down, the Congo split into two forces. The surrounding countries then sent in their troops under the pretext of supporting one or the other of the two forces, and the troops of the various countries began to fight among themselves in the Congo. The conflict in the Congo thus smacks strongly of a regional war of Central African countries being fought on Congolese soil, as opposed to an internal conflict within the Congo—so far, nine countries have sent their troops into the Congo. Also, these troops are after military hegemony and economic interests rather than giving support to either of the forces in the Congo, and they have repeatedly committed massacres and plundered the country's mineral resources.

The response of the international community has also helped prolong the conflict. The UN was quick to mobilize during the conflict in neighboring Uganda, but it has moved slowly over the conflict in the Congo. The international community did finally embark on assistance, though, and a democratic presidential election was held in 2006. Joseph Kabila was elected president, and he has shown his leadership by bringing together the leaders of the opposing forces in the Congo and urging them to agree to peace. As a result, a peace agreement was concluded on January 23 of this year between the government army and over 20 antigovernment organizations, and the situation in the Congo is stable for the present. However, there is no room for optimism yet. The various forces within the country are presently in a state of equilibrium, but if this equilibrium were to be upset the conflict would flare up once again. For this reason it is necessary to construct a system of government based on law that does not depend on the balance of power. This is a difficult enterprise for the Congo to accomplish single-handedly, and cooperation from other countries and the international community is absolutely vital.

Redefining artificial boundaries will not resolve the problem

Question from the floor: Looking at the reporting in regions outside Africa, I have an impression that only the bad side is being emphasized.

Ishi: That tendency is certainly undeniable. In addition, I believe that non-African countries are also responsible for the conflicts in Africa. For example, the five permanent members of the UN Security Council provide 80% of the arms used in conflicts in Africa, and cases can also be seen in which companies from developed countries violate the rules for trading in resources.

Question from the floor: Many of the conflicts in Africa take the form of internal conflicts, and I think this is because national boundaries were set artificially during the age of colonization—I wonder, therefore, if redefining the present national boundaries might be one option for resolving conflict. Also, I believe that strengthening regional mechanisms and establishing a pan-African identity would mitigate conflict.

Rigobert: As far as redefining national boundaries is concerned, I don't think any African leader or people would wish for this. The reason is that any redrawing of national boundaries will cause a scramble for land and simply increase the tension. I was involved in the negotiations between Rwanda and Burundi, and an academic from outside who took part in the negotiations proposed changing bits of land here and there to draw up a new boundary line. This proposal was not accepted, however. Redefining boundaries in that way will not lead to a resolution of the problem.
I believe strengthening regional mechanisms will have an effect, though. For example, former UN Secretary-General Kofi Annan played a tremendous part in the present peace agreement in the Congo. I very much hope that people like Secretary-General Annan, capable of acting while keeping their focus on the whole of Africa, will play an active role as intermediaries in resolving conflicts.

Question from the floor: In the transitional government formed in the Democratic Republic of the Congo in 2003, the various conflicting forces agreed to form a government through power sharing. In contrast to this, there was no power sharing in the government formed following the presidential election of 2006. What are your thoughts on this?

Rigobert: There was no power sharing in the form of a transitional government, but the fluidity of human resources is maintained in Congolese politics by the ruling party picking out talented people from the opposition parties—a certain degree of power sharing is carried out in this way.

Kataoka: To sum up, we have exchanged views today on peace building in Africa, principally in the Congo. I hope that by continuing this debate in the future we can narrow, however slightly, the recognitive and psychological gap between African people and Japanese people.

Hiroyuki Ishi Professor, Hokkaido University Public Policy School Graduated from the University of Tokyo.
Joined the Asahi Shimbun and later served as a professor at the University of Tokyo before being appointed as Japanese Ambassador to Zambia in 2002. He has conducted research in 130 countries, served on numerous national and international bodies, and has authored many publications.

Rigobert Minani-Bihuzo Winner, Second SYLFF Prize; Representative, Groupe Jeremie Rigobert
Minani-Bihuzo is founder and representative of an NGO called Groupe Jeremie that operates in the Democratic Republic of the Congo and the African Great Lake region. He was a recipient of a SYLFF fellowship from 1995 to 1997 at the Institute of Political Education "Pedro Arrupe" in Palermo, Italy, where he received a DEA in Political Science in 1997. He is also a coordinator of the Christian-based NGO network RODHECIC and CDCE (reference below) through which he contributed to the successful monitoring of the presidential and general elections in 2006.